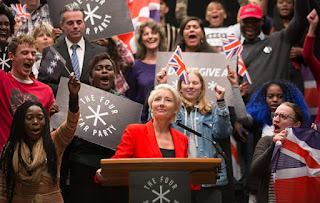 BBC Drama is set to bring audiences even more top British drama in 2019, and is the place to find your next drama obsession…

2019 kicks off with Idris Elba making his long-awaited return in the award-winning Luther, while BBC One fan favourites Call The Midwife and Silent Witness also return this January.

The Missing writers are soon to bring to screens thrilling new drama Baptiste starring Tchéky Karyo and Tom Hollander, and Suranne Jones will star as Anne Lister in Gentleman Jack, the remarkable Regency landowner who sets her sights on marrying Ann Walker, played by Sophie Rundle.

Hotly anticipated Line of Duty returns with Stephen Graham as the new guest lead and Peaky Blinders makes its move to BBC One.

Richard Gere will star alongside Helen McCrory and Billy Howle in political and psychological thriller, MotherFatherSon. As much a family saga as it is savage, it is an unflinching study of power, and how even the mightiest of empires can be in peril when a family turns on each other.

Babou Ceesay and Jill Halfpenny lead the cast of Dark Mon£y, a new topical drama which sees an ordinary London family decide to accept a substantial pay-off from a renowned filmmaker to keep silent about the abuse of their youngest son.

Further BBC Drama highlights include an adaptation of critically acclaimed young adult novel Noughts and Crosses, Trigonometry – a love story about three people who are made for each other, the fifth and final series of Poldark, and Golden Globe nominated and BBC iPlayer box set smash hit Killing Eve will also return to screens for a second series. Other 2019 BBC Drama titles will be announced in due course.

Piers Wenger, Controller of BBC Drama, says: “We have been working hard to bring you more standout unmissable drama in 2019. Across our BBC channels and BBC iPlayer we have something for everyone. Whether you choose to watch television drama to escape from the real world, learn about a part of history, explore contemporary social issues, or watch your favourite novel being adapted for screen – we have a range of new and returning programmes coming that you do not want to miss.”

This follows a standout year in 2018 for BBC Drama, which saw original drama Bodyguard smash records to become the most requested ever programme on BBC iPlayer, whilst A Very English Scandal was also a global hit, with both shows garnering multiple Golden Globe nominations; Informer and The Long Song introduced brand new leading stars of tomorrow Nabhaan Rizwan and Tamara Lawrence; Mrs Wilson became the highest rating Tuesday night drama of 2018; Doctor Who introduced Jodie Whittaker as the Thirteenth Doctor with record ratings; EastEnders shined a spotlight on the topical issue of knife crime while Casualty tackled the subject of rape and Holby City raised awareness of male mental health; and BBC Two featured a range of original authored drama which pushed the boundaries from Black Earth Rising, an international thriller about the prosecution of international war crimes and the West’s relationship with contemporary Africa; to Doing Money which told the shocking true story about slavery in modern Britain and political thriller Collateral which looked at the waves of migration in the UK.