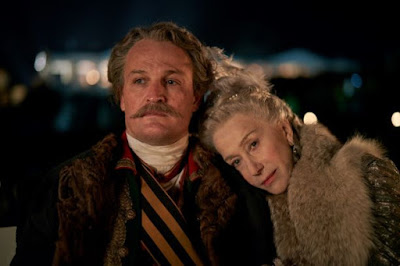 Ahead of its premiere on Sky Atlantic in 2019, a new image has been released of Helen Mirren as sovereign ruler Catherine the Great alongside her longstanding lover and Russian General Grigory Potemkin played by Jason Clarke.

The image features the pair on location in Russia where filming for the four-part Sky and HBO Original Production recently took place alongside palaces and historic venues in Latvia and Lithuania, some of which have never been filmed in before.

Written by Nigel Williams (Elizabeth I) and directed by multi Award-winning Philip Martin (The Crown), Catherine the Great follows the latter years of the Empress’ reign and her passionate affair with Grigory Potemkin amid a backdrop of scandal, intrigue and immense conflict.  Unable to publicly marry and famously promiscuous, Catherine and Potemkin’s story is one of obsessive love for each other and their country as they develop a unique and devoted relationship, overcoming their adversaries to build Russia’s reputation as one of the great European powers of the 18th Century.

The series is the third commission from Sky and HBO’s high-end global drama partnership and produced by Origin Pictures and New Pictures. It will air on Sky Atlantic and TV streaming service NOW TV in the UK and Ireland in 2019. Sky Vision will handle international sales and distribution.

Email ThisBlogThis!Share to TwitterShare to FacebookShare to Pinterest
Labels: Catherine the Great