Pitching In screening brings the stars to Bangor 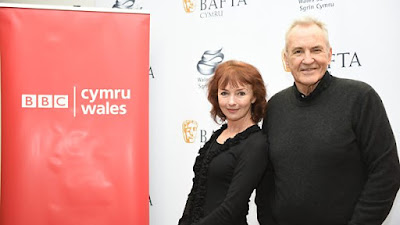 Gavin and Stacey stars Larry Lamb and Melanie Walters return to Wales for new family drama on BBC One Wales and BBC One Daytime. Fans have been given a first glimpse of the star-studded BBC Wales and BBC network family drama, Pitching In.

Larry Lamb and Melanie Walters were among the stars of the show who took to the red carpet for the special screening in Pontio Arts Centre, Bangor. The packed-out audience was given an exclusive first look at the programme in an event hosted by BBC Cymru Wales, Bafta Cymru, LA Productions and Wales Screen.

Set in a caravan park on the north Wales coast, Pitching In tells the story of Frank, a widower getting to grips with big changes in his life. It is due to air on February 12 on BBC One Wales, and on BBC One Daytime later this spring, and also stars Hayley Mills, Caroline Sheen and Ifan Huw Dafydd.

Larry Lamb says: “Pitching In was a joy to be a part of. Frank is a lovely character trying his best in a difficult situation, and it was wonderful to be back in Wales to play this part. Although the north Wales coast was as far away as possible from Barry where we filmed Gavin and Stacey, the Welsh welcome was as warm as ever.”

BBC Cymru Wales Head of Commissioning Nick Andrews says: “Pitching In is a wonderful comedy drama which brings together some of the UK’s best-loved actors. It’s superb to see Larry and Melanie together again in Wales for yet another heartwarming story of family and friendship.”

Dan McGolpin, BBC Controller of Programming and Daytime, says: “I can’t wait for people to see Pitching In. It’s packed with lovable and funny characters, played by an exceptionally talented cast.”

Email ThisBlogThis!Share to TwitterShare to FacebookShare to Pinterest
Labels: Pitching In