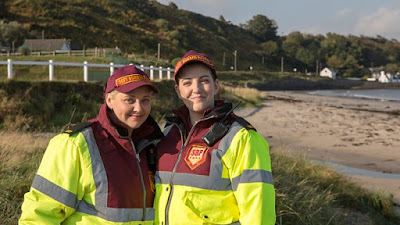 “We patrol the border, but we’re here to let you through.” So say the crack team of Soft Border Patrol officers (SBP), who return with a new five-part series on BBC One Northern Ireland, hitting the highways and byways of Northern Ireland with their very own special brand of ‘border patrolling’.
Such is their strong professionalism and determination to adhere to the law, the teams continue to scour the countryside for anyone or anything found to be unofficially crossing the border by land, sea or along the coast between Northern Ireland and the Republic of Ireland.

Headed up by CEO Lisa McCoy, the SBP teams are a force to be reckoned with - or at least they like to think so.

However all is not as it would seem, as viewers will discover when they tune into Soft Border Patrol.

Once again the new series centres round the antics of teams, patrolling the often twisting highways and byways of the border on push bike and by car, as they try to help commuters cross the border smoothly and swiftly, but not always successfully.

Made by the Glasgow-based Comedy Unit, it was developed as part of the BBC Writersroom initiative with BBC NI Comedy.

Most of the dialogue in the series is largely improvised, performed by a cast including Karen Hassan, who plays Soft Border Patrol CEO Lisa McCoy, with Neil Delamere as Niall Sweeney, Head of Virtual Border, and Shane Todd as Laurie Lyle - Head of PR.

This is multi-territory hilarity featuring a team caught between a rock and a soft place.

Soft Border Patrol is produced by Marie McDonald, executive produced by Justin Binding for BBC Northern Ireland, and by Rab Christie for The Comedy Unit.