The Farmers’ Country Showdown returns to BBC One 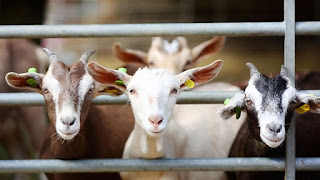 BBC Press Release:
BBC One daytime series The Farmers' Country Showdown is set to return for a third series this winter. This year we have travelled the length and breadth of the UK to celebrate the agricultural industry, with a focus on everything from traditional livestock and fresh flowers to artisan food and alpacas.
Produced by Sidney Street Productions and due to broadcast in January, the popular show will follow the journeys of inspirational farming families as they showcase their produce and compete to win awards at some of the UK's most prestigious farming events.
Each episode will feature two families who farm similar produce or have diversified in similar ways, as they get ready for the same major event in the agricultural calendar. Some families are multi-generational, carrying on a legacy going back hundreds of years, whilst others are new to the land, but equally as passionate.
The show will shine a spotlight on the UK and meet farmers from a variety of specialist industries to discover what success means to them. For some it may be the first time they have exhibited, as they look to make an impression in an increasingly competitive market, while for others it could be the pressure of maintaining success to retain precious silverware.
The series will also enjoy exclusive behind-the-scenes access to The Farmers Weekly Awards, where contestants will battle it out to win the coveted titles: Diversification Farmer Of The Year, Farm Worker Of The Year and Young Farmer Of The Year.
Carla-Maria Lawson, Commissioning Editor for Programming and Daytime, says: "We are proud to showcase the best of British farming talent with a unique insight into one of the most fascinating industries in the UK. These hard-working, devoted farmers are the backbone of the rural economy - this series perfectly illustrates the changing face of farming as well as celebrating the traditional ways of working the land."
Karen Ross, Managing Director, Sidney Street Productions, says: "This series we travelled from Wales to Northern Ireland and everywhere in-between to meet over 40 hardworking farming families and follow their incredible stories. We were lucky enough to attend a bigger range of agricultural shows, food fairs and award ceremonies than ever before, and film just how challenging farming life can be. What we unearthed in our third outing of this series is heartwarming and inspirational, and we hope the viewers will love watching it as much as we loved making it."
The second series was hugely popular, peaking with 1.65 million viewers enjoying the show.
Posted by JD at 22:16