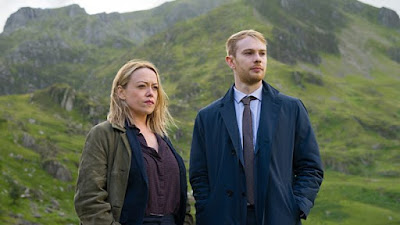 BBC Cymru Wales and S4C have confirmed that filming has begun for the second series of the hit psychological crime drama Hidden/Craith.

The BBC Cymru Wales/S4C co-commission, which aired as Craith on S4C first and then as Hidden on BBC One Wales and BBC Four - will return to TV screens this autumn on S4C and on the BBC at a later date. The series is also backed by distributors All3media.

Cadi John (Sian Reese-Williams) and Owen Vaughan (Sion Alun Davies) return for the second series, as this time another murder leads them into the shadows of the slate-strewn mountains of Blaenau Ffestiniog to unlock more dark secrets.

Hidden/Craith is the latest in the Cymru noir genre that has captivated audiences since Y Gwyll/Hinterland first aired in 2013. Made by Severn Screen, Hidden/Craith brings together the same production team as the first series, including Executive Producer Ed Talfan and Series Producer Hannah Thomas. Gareth Bryn and Chris Foster will direct, whilst award-winning author Caryl Lewis returns as part of the writing team.

BBC Wales Head of Commissioning, Nick Andrews, says: “Hidden proved to be a real hit with audiences in Wales and right across the UK, so it’s no surprise that we wanted to commission a second series. This wonderfully dark crime series is made all the more menacing because it’s set against the rugged backdrop of north Wales. The second series will take us to Blaenau Ffestiniog and I’m sure audiences will be as excited as I am to see this captivating drama return.”

Amanda Rees, S4C’s Commissioning Director, says: “We are thrilled to bring this hugely popular drama co-production back to the screen. The first series of Craith proved to be a big success here in Wales and across the world and its local universal appeal attracted international audiences. The unique, relevant and current stories that’s part of the second series will leave our viewers at the edge of their seats, and we hope that audiences will enjoy Craith once more.”

Maartje Horchner, EVP Content at All3media, says: “We are delighted to be working with such fantastic team on this series and are so thrilled by the positive reception we’ve received for Hidden from our overseas partners.”

Series producer, Hannah Thomas, says: “It's great to be able to bring so many members of the production team and cast back together for a second series and we can't wait to introduce another intense story to the audience. Blaenau Ffestiniog is an amazing place to film and shows yet another facet of the spectacular north Wales landscape that was so central to our first series.”
Posted by JD at 12:30