Rylan Clark-Neal, Mollie King and Marvin Humes confirmed as the expert judges for Eurovision: You Decide 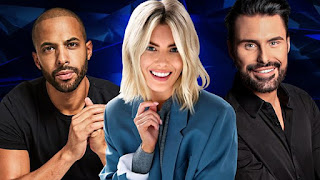 This year sees a change to the judging panel for Eurovision: You Decide, with the new expert judges helping the UK public to decide the winner.

After all six acts have performed in the 'Song-Off' the expert judges will decide which three acts and version of each song will go forward to face the public vote. The three final acts will then perform one more time before the voting lines are opened, and the public chooses which song and performer will represent the United Kingdom at the Eurovision Song Contest 2019.

No stranger to performing, Mollie King has been one fifth of the multi-platinum-selling girl band The Saturdays since 2007, with the group selling more than five million records worldwide, scoring 13 Top 10 singles and five Top 10 albums. She was also a Strictly Come Dancing 2017 contestant, and more recently became a BBC Radio 1 DJ, co-hosting the BBC Radio 1 weekend breakfast show with Matt Edmondson.

DJ, producer, and broadcaster Marvin Humes has experienced staggering success over his 14-year career. As well as being part of boy band JLS and achieving chart success he’s also a successful DJ, playing sets in Ibiza, performing in Vegas and hosting his own show on Capital FM, where he interviews some of the biggest names in the music industry.

Eurovision super-fan Rylan Clark-Neal joined the Eurovision family last year after impressing fans with his in-depth knowledge and love for the contest, both as co-host of BBC Four's Eurovision semi-final coverage in Lisbon and guest judge on BBC Two’s Eurovision: You Decide 2018. He also recently took over Zoe Ball’s Radio 2 Saturday show.

Mollie King says: "I'm so excited to be part of the judging panel for Eurovision: You Decide this year. Eurovision is a huge event in the music calendar every year so it's a real honour to have a say, alongside Marvin and Rylan, in which song and which artist has the all-important job of representing the UK this year in Tel Aviv - I wish them all the best of luck!"

Marvin Humes says: "I have so many great memories of watching Eurovision from growing up, so being able to help decide who will represent the United Kingdom this year is very exciting! I know what it feels like to perform live for the public and a judging panel so hopefully I can bring that experience on the night.”

Rylan Clark-Neal says: “I’m so excited to be back on the judging panel for Eurovision: You Decide and back in the Eurovision family! I’ve been a life-long fan and take it very seriously so it’s a real honour to help the public decide who we choose to send to the main contest in May. I think it will be really interesting as well to see how the different acts perform the different versions of the songs.”
Posted by JD at 13:31