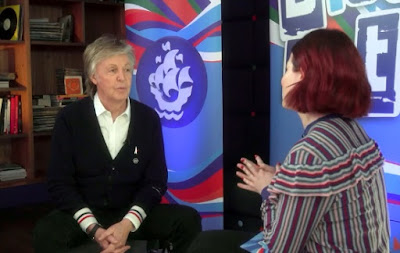 Music legend tells the programme he’s now "made it" but that he "doesn’t really know how" to write songs.

Sir Paul McCartney has sold over 700 million albums around the world as a solo artist, with his band Wings and as a member of the legendary group The Beatles, but declared to Blue Peter that he’s "made it" when the show presented him with a prestigious Gold Blue Peter Badge recently.

The music legend, who can be seen receiving his badge on Blue Peter this Thursday (7 February 2019) on CBBC at 5.30pm, also revealed to the show that he doesn’t really know how to write songs.

When Blue Peter presenter Lindsey asks him what advice he would give to young people who aspire to become musicians and songwriters, Sir Paul says: “The only advice really is to do it… a lot.

"I have a song-writing class and the first thing I say to them is, look, I don’t really know how to do this - and at first they kind of look at me, but when you think about it there is no formula.

"I know how to write one of my songs but I can’t say ‘you do it that way’, because it’s a very personal thing. So the advice really is to just do whatever it is you’re doing… a lot!”

Sir Paul, the most successful musician and composer in pop history, was awarded the coveted badge for inspiring generations of people with his music just ahead of performing to a sold-out crowd at The O2 arena in London on his Freshen Up tour.

A delighted Sir Paul says: “That is beautiful, that’s a great badge. I will wear it with great pride. Yes! I made it!”

The Gold Blue Peter Badge is the programme’s highest award, only a handful of which are presented each year to individuals who show great expertise in their chosen field; are considered to be role models; and who encourage and motivate children across many generations.

Blue Peter's Editor Ewan Vinnicombe says: “Sir Paul McCartney has inspired generations of Blue Peter viewers to love music and be creative - a core value of Blue Peter. I’m thrilled that we have been able to honour the legend that is Sir Paul with our highest accolade - a Gold badge.”

In October 2018 Blue Peter celebrated its milestone 60th birthday which kicked off with the launch of the Gold Badge Walk - a path to honour some of the well-known names who have received the special accolade - at MediaCityUK, in Salford. The path celebrates some of the most successful people in sport, literature, music and other industries to receive the prestigious honour.