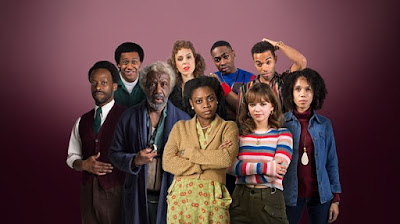 Some of the finest British actors, writers and directors, each with a personal connection to the Windrush story, tell the story of the Afro-Caribbean community in modern-day Britain through a series of monologues.

A host of the UK’s finest acting talent - including Sir Lenny Henry (The Long Song, Broadchurch) and Vinette Robinson (Sherlock, Doctor Who) - explore modern British family life through a series of heartfelt monologues for BBC Arts on BBC Four.

Set in the front room of an Afro-Caribbean home, the series explores the highs and lows of one family from the 1940s to the present day through their hopes and desires, challenges and shattered dreams.

Curated by Kwame Kwei-Armah (Artistic Director, Young Vic theatre), the series of eight 15-minute monologues is led by four female directors and has been developed by eight leading British writers.
A partnership between BBC Arts, the Young Vic theatre and Douglas Road Productions, the series follows similar partnerships - Queers (2017, curated by Mark Gatiss) and the highly-acclaimed Snatches (2018, curated by Vicky Featherstone of the Royal Court Theatre).

Can love overcome fear? Can perseverance overcome ignorance and racism? What does it cost to belong? Soon Gone: A Windrush Chronicle challenges our collective understanding of what it means to be part of the Afro-Caribbean community in modern-day Britain.

Eunice arrives into 1940s England full of hope and ambition, and we follow her dynasty across leaps of a decade to the present day. Each self-contained monologue links to the original arrival of the enthusiastic, young nurse. We hear of Eunice’s baby, conceived out of wedlock with a runaway white doctor, and of Cyrus - her knight in shiny overalls - who offers his heart and loyalty by agreeing to marry her and put his name on the child’s birth certificate, despite the fact that Eunice doesn’t love him.

Sir Lenny Henry says: “Soon Gone: A Windrush Chronicle is a wonderful entry point for anyone who wishes to take the psychic temperature of a diaspora generation. I’m proud to be associated with this project and I hope you enjoy it. We tell these stories because they are a gateway to understanding for our children.”

Kwame Kwei-Armah, Artistic Director of the Young Vic theatre, brings together some of the finest British actors, writers and directors, each with a personal connection to the Windrush story, to tell the tale through a series of deeply emotive monologues.

Kwame Kwei-Armah says: “This has been an incredibly personal project for me: as a storyteller I’ve felt a huge sense of responsibility in exploring this history. Having the chance to honour my late parents and the pioneering Windrush immigrants - as a generation begins to slip away - has felt incredibly moving. I hope that the series will draw viewers to question their own story and how we collectively move forward.”


Series outline
The 15-minute episodes will be broadcast in pairs in February 2019. Exact broadcast details to be confirmed closer to transmission.