Star-studded cast join Inside No. 9 for fifth series 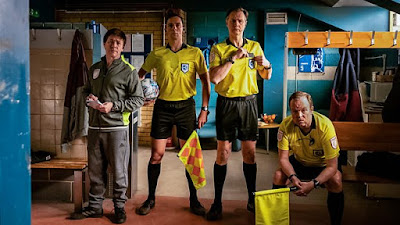 With filming underway for the fifth series of the award-winning and critically-acclaimed Inside No. 9, a host of talented actors are set join masterminds Reece Shearsmith and Steve Pemberton as they create six brand new stand-alone stories which promise to bring more exceptionally twisted tales to BBC Two.

The new series follows last year’s live Hallowe’en special Dead Line, which has been cited by The Guardian’s TV reviewers as the best TV episode of 2018. Season five will stay true to the show’s anthology format, with each episode bringing an original story, a cast of new characters and surprising twists in the most unexpected of places. Combining horror, thriller, drama and comedy, Inside No. 9 never fails to amaze, delight, unnerve and amuse in equal measures, with series four treating audiences to an episode written entirely in iambic pentameter and a murder mystery told in reverse chronological order.

Reece Shearsmith and Steve Pemberton say: “We’re delighted to announce a guest cast brimming with both emerging and established talent, all judiciously chosen to make us look a bit classier by association.”

Shane Allen, Controller, BBC Comedy Commissioning, says: “Reece and Steve consistently dazzle and delight with what is undoubtedly the most inventively prolific storytelling series on television. Their ability to subvert and surprise makes each show a unique experience for the viewers. It’s the antidote to a world of familiar cosy TV formats.”

Last year, Reece and Steve won the Writer: Comedy Bafta Award for The Bill (from series three), with series four winning the South Bank Show Award for Comedy. This year, Inside No. 9 scooped up two wins in the Comedy.co.uk Awards, Best Comedy Drama and Comedy of the Year for 2018, following on from the same double win the previous year and breaking records as the first time a show as had a double consecutive win in the award's 13 year history. These awards add to the growing list of wins that include the Writers’ Guild Award for the Best TV Situation Comedy in 2017, the Rose d’Or Television Comedy Award (2016), the RTS Programme Award for Comedy Performance (2015), and two major prizes at the Banff World Media Festival (2014).

One of the six new films in this series will be directed by Steve Pemberton, returning to the role after Cold Comfort and Nana’s Party from the 2015 series. Guillem Morales (Julia’s Eyes, Decline and Fall) returns to direct three further films, with the two remaining films directed by Matt Lipsey (Psychoville, Upstart Crow)
Posted by JD at 15:09

Email ThisBlogThis!Share to TwitterShare to FacebookShare to Pinterest
Labels: Inside No. 9