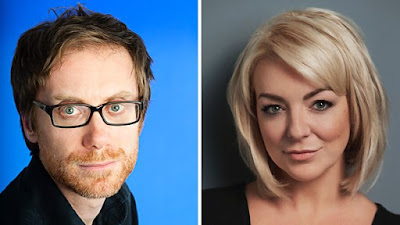 Stephen Merchant and Sheridan Smith will star in new BBC One drama The Barking Murders, which is due to commence filming this spring.

From Jeff Pope and Neil McKay, the award-winning team behind The Moorside and Appropriate Adult, the new factual drama will go beneath the headlines to shed new light on this story by telling it from the point of view of the families of Stephen Port’s victims, focusing on their fight to uncover the truth about what had happened to their lost sons and brothers in the face of a now widely-criticised police investigation.

Stephen Merchant (Fighting With My Family, Extras, The Office) will play Stephen Port, and Sheridan Smith (The Moorside, Care, Mrs Biggs) will play Sarah Sak, the mother of Anthony Walgate. Also joining the cast is Jaime Winstone (Five Daughters, Babs) as Donna Taylor, one of the sisters of Jack Taylor. The director is David Blair (Care, Reg).

On joining the cast, Stephen Merchant says: “This is a story that can’t be ignored - how four young lives were lost and their families’ brave attempt to uncover what happened. This factual drama will shed light on their story, so it’s a privilege to be a part of telling it with the brilliant combination of Jeff Pope, Neil McKay and the BBC.”

Sheridan Smith adds: “‘I love playing real life characters - especially an inspirational woman like Sarah Sak - but with it comes responsibility. Along with the other families, Sarah went through so much heartache and it would have been easy for her to just accept what she was being told by the police, but something inside made her keep fighting for her son.”

Writer, Neil McKay, says: "Four young men with their entire future ahead of them lost their lives in a brutal and tragic way. This is a story not only of the consequences of that loss but also of the extraordinary courage and resilience shown by those who loved them as they sought truth and justice. It is a privilege to be able to tell it."

Jeff Pope, Executive Producer, ITV Studios, says: "I think this is an opportunity to say something about how we don't always have to accept what we are told by those in authority, and how determination, sheer bloody-mindedness and - above all else - love, will always triumph."

Piers Wenger, Controller of BBC Drama, says: “The Stephen Port murders have shone a light not just on the life of one deeply disturbed individual but into the plight of the four innocent young gay men who fell foul of him. Jeff and Neil will go behind the headlines to tell the story from a fresh perspective considering the impact of these crimes rather than the crimes themselves and will explore the challenges the police faced in identifying the serial nature of the killings. We are thrilled with the cast which has been assembled to tell this story and look forward to bringing this difficult but very timely story to BBC One.”

Written by Neil McKay, the 3x60’ drama will be directed by David Blair, produced by Serena Cullen and executive produced by Jeff Pope for ITV Studios, Head of Factual Drama, Neil McKay, and Lucy Richer for the BBC. The drama has been commissioned by Piers Wenger, Controller of BBC Drama, and Charlotte Moore, Director of BBC Content for BBC One. It will be co-produced by BritBox, where it will premiere in the US.

Jeff Pope and Neil McKay worked together on The Moorside, which told the story of the community impacted by the disappearance of Shannon Matthews, and Appropriate Adult, which looked at the story of serial killer Fred West from the point of view of trainee social worker Janet Leach. They have a reputation for factual drama based on detailed research that focuses not on the crime itself but those affected by the events, whose perspective gives a fresh eye on these important news stories.

This drama tells the story of four victims of Stephen Port: Anthony Walgate, Gabriel Kovari, Daniel Whitworth and Jack Taylor and their families and friends who worked tirelessly to find out what happened to them.

Stephen Port received a life sentence with a whole life order in November 2016.

Email ThisBlogThis!Share to TwitterShare to FacebookShare to Pinterest
Labels: The Barking Murders