Eating With My Ex: Celebrity Specials 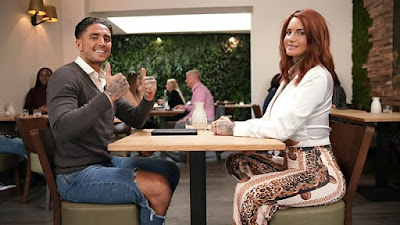 Eating with My Ex, the Bafta-nominated BBC Three show, which sees former couples reunited over dinner to pick over the bones of their failed relationships, will include two celebrity specials as part of the current, new 11x30' series.

Alongside the often awkward and revealing questions being served up on their plates, exciting new ingredients have been added to ensure that Eating With My Ex delivers plenty more heart-warming, funny and authentic encounters.

The new series launched on BBC Three earlier this year and episodes that are currently available to watch include a guy who wants to confront his ex-girlfriend over cheating with one of his mates, a harsh revelation over what exactly happened on a lads’ holiday in Zante and the man who unashamedly hopes to gain a friend with benefits.

The first of the celebrity specials, will see reality TV star Jemma Lucy reunite with ex-boyfriend, TV presenter Stephen Bear, to confront him over his alleged cheating, but will he finally admit to his mistakes? And West End musical inspiration drag queen Jamie Campbell meets up with his ex-boyfriend, Chad, to apologise for the way he ended their relationship.

The second celebrity episode will see Love Island’s Sam Bird reunite for a meal with his ex-girlfriend Elle in Norwich. Sam hasn't seen part time model, Elle, since he ghosted her and left for the villa. She wants to meet him again, but is Sam ready to pick up where they left off? And comedian London Hughes is meeting her ex from seven years ago, fellow comic Tommy. Will she be able to get to the bottom of all the rumours about his sexuality?
Posted by JD at 12:39