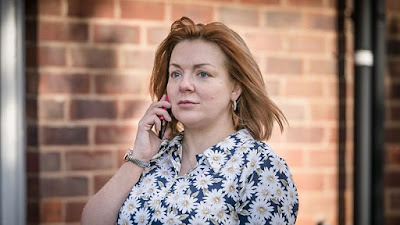 From Jeff Pope and Neil McKay, the award-winning team behind The Moorside and Appropriate Adult, the new factual drama will go beneath the headlines to shed new light on this story by telling it from the point of view of the families of Stephen Port’s victims, focusing on their fight to uncover the truth about what had happened to their lost sons and brothers in the face of a now widely criticised police investigation.

The news coincides with the release of the first picture from the series featuring Sheridan Smith in character as Sarah Sak, the mother of Anthony Walgate. Filming on The Barking Murders (w/t) continues, with the series due to air in 2019.

On casting, Jeff Pope says:
"Neil and I are delighted to be working with Sheridan Smith again, who brings such honesty and passion to every character she plays. Stephen Merchant didn't hesitate when we asked him to play serial killer Stephen Port and we are so grateful that he has agreed to take on such a difficult and challenging role.”

Lucy Richer, Executive Producer for the BBC, adds:
"I’m so pleased that we’ve assembled such an extraordinary cast to be a part of bringing this important true story to screen with sensitivity and compassion. This compelling story shows the tireless courage and determination of the victims’ families and friends to find out what really happened. It’s an honour to tell it on BBC One."

Written by Neil McKay, Head of Factual Drama at ITV Studios, the 3x60’ drama will be directed by David Blair, produced by Serena Cullen and executive produced by Jeff Pope for ITV Studios, Neil McKay and Lucy Richer for the BBC.
Posted by JD at 13:25