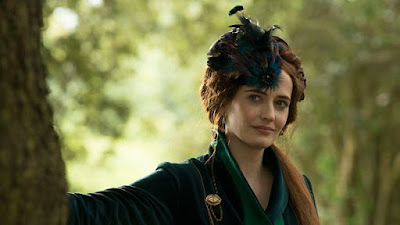 BBC Two has released a first-look of Eva Green (Casino Royale, Penny Dreadful, Sin City, A Dame To Kill For) as Lydia Wells in The Luminaries, the adaption of Eleanor Catton’s 2013 Man Booker Prize-winning novel of the same name.

They are joined by an ensemble of antipodean acting talent, including Marton Csokas as Francis Carver (The Equalizer, Lord Of The Rings, Into The Badlands), Erik Thomson (The Code, Packed To The Rafters), Benedict Hardie (Hacksaw Ridge, The Light Between Oceans), Yoson An (Mortal Engines, Dead Lucky) and New Zealand newcomer, Richard Te Are.

The series will be broadcast on BBC Two in the UK and TVNZ1 in New Zealand. Produced by Working Title Television and Southern Light Films, it is being adapted for the screen by novelist Eleanor Catton and director Claire McCarthy (Ophelia, The Waiting City).

The Luminaries tells an epic story of love, murder and revenge, as men and women travelled across the world to make their fortunes. It is a 19th century tale of adventure and mystery, set on the Wild West Coast of New Zealand’s South Island in the boom years of the 1860s gold rush.

The story follows defiant young adventurer Anna Wetherell, who has sailed from Britain to New Zealand to begin a new life. There she meets the radiant Emery Staines, an encounter that triggers a strange kind of magic that neither can explain. As they fall in love, driven together and apart by fateful coincidence, these star-crossed lovers begin to wonder: do we make our fortunes, or do our fortunes make us?

The Luminaries (6x60’) will be produced by Working Title Television - a joint venture between NBCUniversal International Studios, Tim Bevan and Eric Fellner, and Southern Light Films for BBC Two, in association with TVNZ, Fremantle and Silver Reel. The series will be executive produced by Mona Qureshi for the BBC; Eleanor Catton, Andrew Woodhead, Tim Bevan and Eric Fellner for Working Title Television; Christian Vesper for Fremantle, Claudia Bluemhuber for Silver Reel and Tim White for Southern Light Films with Producer Lisa Chatfield.

The series will be sold internationally by Fremantle. The Luminaries has been supported by the New Zealand Film Commission.
Posted by JD at 14:16