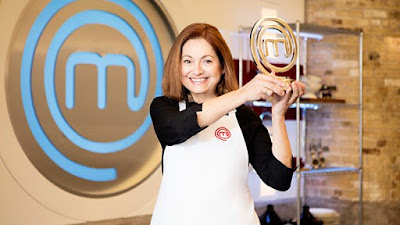 After competing in the first ever all-female MasterChef final, retiree Irini Tzortzoglou (61) has been crowned MasterChef 2019 Champion becoming the fifteenth amateur cook to claim the title.
Facing competition from 54 other determined contestants, through seven gruelling weeks of culinary challenges and a close final cook-off, Irini was awarded the MasterChef 2019 trophy by judges John Torode and Gregg Wallace.

On winning, and after asking if she could share the trophy with her fellow finalists, an emotional Irini said: “I’m trembling, I’m floating on air, I don’t think my feet are touching the ground right now. What an experience, I just don’t have the words to say how thrilled and grateful I am.

She added: “I can finally say I believe in me; I believe it takes something tough at times, but that strength can surface, and when it does it can achieve wonders.”

John Torode said: “Taking the food that she knows from the island of Crete and putting it into a modern context – that’s what Irini does and it’s stunning. She has a magic in her finger tips and a fire in her belly. She wanted to make her grandchildren proud – she’s done that!”

Gregg Wallace said: “Irini’s little touches of Greek flavours and Greek ingredients are nothing short of inspired. You can learn cooking technique, what you can’t put into somebody is absolute love and passion, and Irini is just bursting with it. It’s from the heart every time she cooks.”

John added: “She’s introduced us to things we’ve never seen before, flavours we’ve never tasted before. She is able to take these flavours she loves so much and take them to a completely different food. It’s magical.”

Ahead of John announcing the winner, a tearful Gregg said to the finalists: “Watching you grow, watching you achieve your personal goals, I’ve found uplifting. I think today was a proper celebration of culinary art done by people who are obviously completely in love with what they do. It’s joyous.”

Irini fought her way from 54 amateur cooks through to the final week and, along with the other incredibly talented finalists, teacher, Jilly McCord (42) and police officer, Delia Maria Asser (28), was pushed to show the judges the skills, creative flair and perseverance needed to succeed at the highest level in the intense final challenges.

In an extremely demanding final week, MasterChef fans have seen Irini cook a fine dining tasting menu for some of the team who took part in the Transglobe Expedition - the first and only longitude circumnavigation of the world. The event celebrated the 40th anniversary, and diners included expedition leader, and the world’s greatest living explorer, Sir Ranulph Fiennes. Irini has travelled on a trip of a lifetime to Hong Kong to learn from dim sum master Chef Tak, at Lung King Heen at the Four Seasons - the first Chinese restaurant in the world to be awarded three Michelin stars. She has also cooked at Tate Dining Rooms under one-Michelin star chef patron Vicky Lau, before heading back to London to be mentored by and cooking for two-Michelin star chef, Raymond Blanc, one classic dish from the menu at his famed restaurant Belmond Le Manoir aux Quat’Saisons.

The final task was to prepare a three-course meal for judges John Torode and Gregg Wallace. Irini’s winning menu, inspired by her childhood and Greek heritage, started with Red mullet with a squid risotto, confit tomatoes, a rosemary and garlic sauce, with bottarga (grey mullet roe) and an aged balsamic foam. Irini’s main course was Griddled rosemary lamb chops with trahanas puree (cracked wheat cooked in soured milk), peas, confit herb tomatoes, pearl onions, crumbled feta and a lamb and tomato jus. She finished the meal with a Fig and hazelnut baklava with roasted honeyed fig topped with Chantilly cream and candied fig, a fig leaf ice-cream and syrup, on a hazelnut crumble.

When her father passed away unexpectedly at age 48 her life took a different route, which brought her to London and to a career in banking.

On her reasons for entering the competition, Irini said: “I decided to enter because I was driven by what felt like a higher force, which was telling me that my life had yet to start and that I still had work to do. Over the years, I felt I was not here to work in banking, and having discovered my passion for food and all it signifies I knew that this was my calling.”

On her future plans she said: “My biggest ambition is to continue learning, researching, experimenting and show casing Greek food and ingredients. I would love to get published a lifestyle book with memories and recipes which I have been writing for the past year, and would love to film a programme all around Greece which combines cookery, travel, diet, health, environmental and historical topics. With its diverse land and climate Greece provides for a variety of produce and food.”

Looking back on her time in the competition, Irini said: “I feel a totally different person from only three months ago; I feel I have grown massively. What MasterChef has given me is deep seated confidence. It’s been a long road but I have enjoyed every second.”

Irini grew up in Crete in Greece, and now lives in Cartmel, Cumbria with her husband, John. She has three step-children and three step-grandchildren.