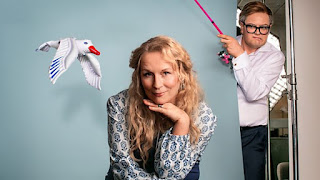 Ten years after audiences were wowed by Jennifer Saunders’ dance moves and Philip Glenister’s vocal prowess, Mamma Mia for Comic Relief is back!

The sketch will premiere exclusively on BBC One during Red Nose Day on Friday 15 March
Written by Jennifer Saunders as a tribute to last summer’s box office smash hit, Mamma Mia! Here We Go (Yet) Again will see some of the UK’s biggest names in acting and comedy recreating memorable moments from the sequel and even attempting to sing some of Abba’s most iconic songs.

Jennifer Saunders says: “If I could have lived on the fake Mamma Mia set for the last year, I would have been very happy. So I am very, very, very happy to be back. This is undoubtedly one of the silliest things I’ve done. But my god I enjoy it so much.”

Miranda Hart and Sue Perkins will also be on hand to ensure it all runs smoothly, returning as the producer and director.

More cast names will be revealed in due course.

Mamma Mia! Here We Go (Yet) Again will premiere exclusively on BBC One during Red Nose Day on Friday 15 March. The sketch has been written by Jennifer Saunders and Richard Curtis and directed by Ed Bye. Colin Hopkins and Peter Davey are the Executive Producers for BBC Studios. Mel Crawford is the Executive Producer for Comic Relief.
Posted by JD at 13:25