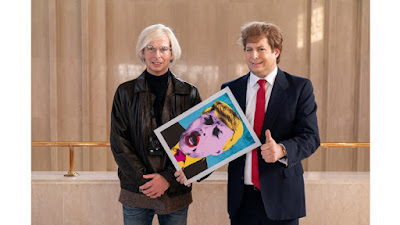 Series three of the International Emmy Award nominated comedy series Urban Myths, returns to Sky Arts, the UK’s only TV channel dedicated to arts, music and culture.  The series features eight raucous episodes fictionalising some of the most peculiar stories to have ever leaked out of Hollywood, the music industry and the world of art and culture.

Stories include the unlikely decades-long friendship between Princess Margaret and Mick Jagger; the bizarre night out shared between Freddie Mercury and Princess Diana; the day a burglar stumbled upon Grace Jones and artist Jean-Paul Goude’s New York apartment; Madonna’s short but passionate and influential relationship with Jean Michel Basquiat; the infamous trial of Joan Collins vs. Random House; how Paul McCartney was inspired to write Yesterday; how Andy Warhol came to judge a cheerleading competition for Donald Trump and the prolonged visit of Hans Christian Andersen to ‘friend’ Charles Dickens’ family home.

Each of the eight episodes puts its own unique spin on extraordinary events, taken with more than a pinch of salt, and are performed by a selection of great actors, including Mat Baynton, Sophie Kennedy Clark, Hugh Dennis, Kelly MacDonald, Stephen Mangan, Jack McBrayer, Gloria Onitiri and David Walliams. Following the previous two series, new episodes of Urban Myths continue to wryly re-imagine how certain events unfolded, through the eyes of some of Britain’s most talented writers and directors.

Phil Edgar-Jones, Director of Sky Arts, says:
“You might regard our Urban Myths series as a bit of “Fake History” but as all history is totally made up anyway we should regard these eight perfectly formed comedies as films of historical record, sort of. This series is one of the jewels in the crown of Sky Arts and with totally true (ish) tales from everyone from McCartney and Madonna to Dickens and Trump - our loyal band of discerning viewers are in for a treat.”