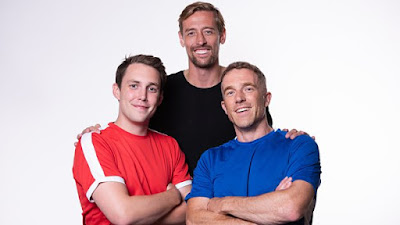 Footballing legend Peter Crouch is one of the sport’s funniest personalities and now he has one of the biggest podcasts in the country.

Crouch, who recently signed for Burnley and has played for Liverpool and Spurs among others as well as winning 42 caps for England, has now scored a second series of his hit podcast.

That Peter Crouch Podcast returns this month after becoming the BBC’s biggest sports podcast and the biggest ever podcast launch for BBC Radio 5 live. It’s a bigger phenomenon than Peter’s robot dance was way back in 2006. Series two starts with two episodes on 20 March and a new episode will be available each Wednesday for ten weeks.

For fans who can’t wait for the new series, a new episode, called That Bonus Episode, is available today on BBC Sounds. Chris finally makes good on the bet he lost with Peter in series one. Plus, we find out what happened when Crouchy took on the rest of the dads at the school sports day.

The fascinating insights revealed in the first series include how Peter bought the book Jose Mourinho: How To Win The League as a secret Santa gift for his Liverpool boss Rafael Benitez, plus his memories of doing yoga in front of Graeme Souness.

As well as grabbing global headlines, That Peter Crouch Podcast has won armies of fans with thousands contacting the team each week.

Peter Crouch says: “I’ll be honest, when we started this I had no idea what a podcast was. Now I’m all in - I can’t walk down the street without people shouting at me about the Iniesta photo. Or Karl, and what he can do. Feels like me, Tom and Chris are only warming up, too.

Jonathan Wall, controller of BBC Radio 5 live, says: “That Peter Crouch Podcast is a runaway hit and its many listeners will be as thrilled as we are Peter and the team will be back. Peter is one of the biggest characters in the world of football and now he’s a towering figure in the world of podcasting.”

The first series of That Peter Crouch Podcast was one of the BBC’s top sporting hits last year. It is one of the best performing podcasts on BBC Sounds, alongside other big hits from BBC Radio 5 live including End Of Days, Brexitcast, You, Me And The Big C, Football Daily and Tailenders.

That Peter Crouch Podcast is available on BBC Sounds.
Posted by JD at 13:24