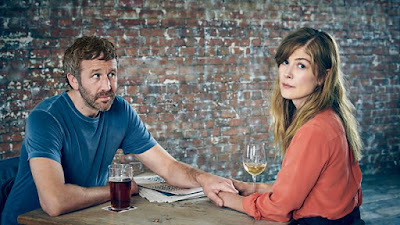 State Of The Union follows Louise and Tom (Pike and O’Dowd) who meet in a pub immediately before their weekly marital therapy session. With each successive episode we piece together how their lives were, what drew them together and what has started to pull them apart. Hornby explores the complexities of marriage with his inimitable honesty and humour.

Nick Hornby says: “I am delighted that State Of The Union will be shown on the BBC - it’s absolutely the right place for it, and it was hard for us to imagine any other home in the UK.”

Patrick Holland, Controller, BBC Two, says: “I am so delighted to bring this to the BBC Two audience. The writing is so fantastic, the performances from Rosamund Pike and Chris O’Dowd are pitch perfect and the direction is the very best in the world. What a treat.”

Email ThisBlogThis!Share to TwitterShare to FacebookShare to Pinterest
Labels: State Of The Union