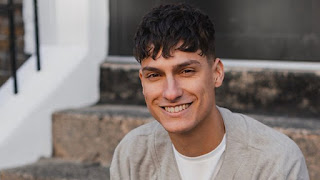 The new presenter of the world’s longest-running children's TV show is today revealed as Richie Driss who joins Blue Peter for his first live show on CBBC next month.

Richie is the 38th Blue Peter presenter and will co-host alongside Lindsey Russell and new Blue Peter dog, Henry, from Thursday, May 16 on CBBC at 5.30pm.

Richie, 30, previously worked as a presenter and producer for Joe Media, where he fronted weekly broadcasts interviewing Hollywood A-listers and taking on challenges such as commando training.

Originally from St Albans, Richie studied Film and Television at University of Wales, Aberystwyth, before eventually ending up in local radio and launching his own series on GRM Daily. He then joined Joe Media in 2016 before landing his dream job on Blue Peter.

Richie says: “To say that becoming a Blue Peter presenter is a dream come true doesn’t even begin to describe it. To be named presenter of the longest running children's television programme in the world is a far bigger achievement than I ever dreamt possible. I cannot wait to get started and follow in the footsteps of the 60 years of iconic presenters who have worn the famous Blue Peter badge before me. I am going to give it my all, no matter what the job throws at me.”

Matthew Peacock, Acting Editor, Blue Peter, says Richie stood out at his auditions because he wasn’t fazed by anything they threw at him. “Richie really impressed us during his auditions and showed that he has plenty of Blue Peter spirit when he came face to face with a Burmese python and took on a ninja assault course. We’re sure he will be a big hit with the legions of Blue Peter fans.”

Richie has already been filming for the programme and has been thrown in at the deep end with his very first challenge - singing with The Kingdom Choir in front of a live audience.

He joins Blue Peter following the departure of Radzi Chinyanganya on April 18 who had been with the show for five and a half years.

Head of BBC Children’s In House Productions, Helen Bullough, says: “Richie has that Blue Peter ‘can do’ attitude that has inspired so many generations of children over the past 60 years and which still remains at the heart of the show today. He is going to be a fantastic addition to the programme alongside Lindsey and Henry.”

In the run up to Richie’s first show there will be two guest presenters joining Lindsey in May. Broadcaster and former England star, Alex Scott, will co-host on May 2, and actor and presenter, Cel Spellman, will present with Lindsey on May 9.
Posted by JD at 16:53