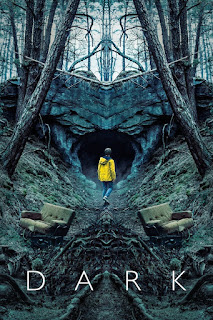 Jonas finds himself trapped in the future and desperately tries to return to 2020. Meanwhile, his friends Martha, Magnus, and Franziska are trying to uncover how Bartosz’ is involved in the mysterious incidents occurring in their small hometown of Winden. More and more people are drawn into the events orchestrated by an obscure figure who seemingly controls everything that is connected throughout different time zones.


About Dark
Children start disappearing from the fictional German town of Winden, bringing to light the fractured relationships, double lives, and dark past of four families living there, and revealing a mystery that spans three generations. The series follows Jonas Kahnwald, a teenager struggling to cope with his father's suicide; police officer Ulrich Nielsen, whose brother disappeared 33 years earlier; and police chief Charlotte Doppler.

The story begins in 2019 but spreads to include storylines in 1986 and 1953 via time travel, as certain characters of the show's core families grow aware of the existence of a wormhole in the cave system beneath the local nuclear power plant, which is under the management of the influential Tiedemann family. During the first season, secrets begin to be revealed concerning the Kahnwald, Nielsen, Doppler, and Tiedemann families, and their lives start to crumble as the ties become evident between the missing children and the history of the town and its citizens.
Posted by JD at 16:59

Email ThisBlogThis!Share to TwitterShare to FacebookShare to Pinterest
Labels: DARK