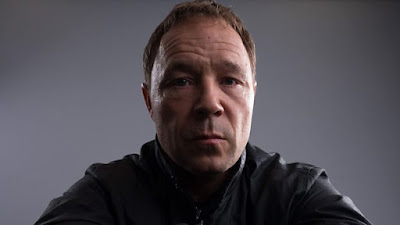 Why did you want to be part of Line of Duty?

Because I watch it and my mates are in it. Who wouldn’t want to go out and play with their mates?

Jed approached you for the series. What did he say to you during the first phone call? I take it you didn’t need any convincing?

No not at all. I’m a fan of the show anyway; I’ve watched it from the beginning. It was really nice, he just phoned me and said: “I’m writing this character which I think you’d be great for, I’d like you to have a look at it, it would be a pleasure to work with you, I like your stuff and I’m a fan of your work and it would be really nice to have you on board and become a member of the family.” Which was a lovely thing for someone to say, a writer of his calibre and somebody who I admire as a writer and a creator.

To say that they had me in mind when they were writing it is a hell of a compliment. So it was a no brainer. I said: “Yeah sure, I’d love to!” I was already doing it, even if I was only in five pages! But I read it and I thought even in the first four or five pages that I could see me doing this, this is juicy.

You lived in Belfast for the series, with some of your oldest industry friends. Did you have chance to spend time with them outside of filming?

Of course, we went for quite a few dinners which were nice after a hard days graft. We spent quite a lot of time together; we went over lines, we went through scenes together a lot, whether it was at my house or one of their houses. We went to the gym quite a few times together. Every opportunity we got we went out and about looking around - it was really nice! They showed me a few nice restaurants, predominantly curries, because Jed loves an Indian, so we spent a lot of time in a curry house! It was really lovely. I’ve worked in Belfast a couple of times, it’s a beautiful city and I love the people there, they’re really friendly and very welcoming.

You’re a part of some big action sequences - are they fun to do?

Of course, yeah! As a kid we used to play army and would run round the garden. Now, roll on 45, I’ve got an M16 in my hand and been told: “Here’s a load of ammunition, you’re not going to hurt anyone, just point it over there, don’t point it directly at each other, and shoot!” It’s a lot of fun jumping out of cars, shooting guns and rolling around on the grass and everything - it’s brilliant! It’s very exciting.

Were there any memorable moments on set?

Rochenda, Tomi (May) and I used to have a lot of fun on set, and John our director, he’s a bit of a champ. There was one bit when we’d just committed a robbery and we shot off, and we were actually driving through the streets of Belfast with our balaclavas and machine guns in the car and we realised we'd better get back to set! So that was quite funny, but wouldn’t have been too funny if people had seen! It was all a lot of fun; it was a lovely environment to work in. 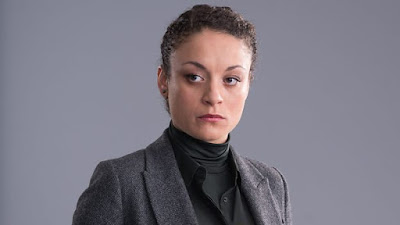 Were you a fan of Line of Duty before you got the part?

Absolutely, I watched it every single year. When I auditioned for the part I watched it all again over two or three days. I was a massive, massive fan. It was the first time auditioning for Line of Duty and I got lucky, hole in one!

Have you found it tricky to stay quiet on the plotlines? Did any of your friends and family try to get the truth from you?

Of course they have tried to bribe it out of me! They love an exclusive. But the truth is, it’s like being told what a present is whilst you’re unwrapping it. It seems like a good idea, but it’s not - it’s underwhelming! I tell them to watch it like everyone else, I’m going to be watching it too as I wasn’t in some parts so they will be a surprise to me too and I want it to be that way. Even my agents haven’t read the scripts as they want to enjoy it as it comes out!

What can you tell us about your character Lisa?

Did you have any action scenes and were they fun to film?

Absolutely, sometimes in the midst of them you can’t believe what’s happening as it’s so realistic - so there’s no acting required! They are set up in such a good way.

From being a fan, was there anything that surprised you about the show/how it’s made?

No real shocks but on a personal note, walking in and working with these amazing actors is mind blowing. It’s shocking how relaxed everyone is, you expect utter chaos but it runs like a well-oiled machine.

Were there any memorable moments on set?

Stephen had a cold one time on a freezing on a night shoot. He asked one of the dressers to put Olbas oil in his balaclava, but I think they put a drop too many in as his eyes just wouldn’t stop running. And he had to wear it all night, so he was just crying the whole time!

How was filming in Belfast?

I totally love that city; it’s in my top five I would say. It’s a nice place to mooch about in, good restaurants, lots of bars and pubs, markets and things to see. The people are really nice. 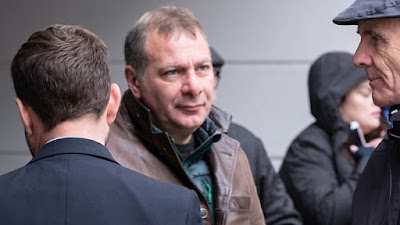 Where did the idea for Line of Duty come from?

I wanted to do a cop show that was different in some way from what was on normal television in terms of regular cops chasing down criminals; so I had the idea of an anti-corruption unit, basically cops verses cops and that became the central concept of the series.

Did you know where you wanted the story to go for series five?

In series five we enter new territory, because we get inside a criminal gang which is something we haven’t done before. The so called ‘balaclava men’, the organised criminal group who’ve been featured on and off through the preceding four seasons, are now featured more prominently in this series.

What about the choice of central character?

Our antagonist this season or our guest lead is John Corbett who is part of the organised criminal group that is the focus of AC-12 activity in series five. He’s played by Stephen Graham who is a fantastic actor and someone that we’ve all wanted to work with and is a great fit with the rest of our cast.

How would you describe his character?

John Corbett is probably our most dangerous and villainous character that we’ve ever featured as an antagonist. He’s involved in serious criminal offences, he’s the leader of a ruthless gang of violent criminals and I would say that he presents probably the biggest ever challenge to AC-12.

It was an absolute pleasure working with Stephen Graham. I’ve admired his work for many years, and what he brings is that real sense of authenticity. He works incredibly hard on the naturalism of the scenes so that when you do a take it feels like its live, feels like it is real.

What can we expect from this new series?

In this series of Line of Duty we enter brand new territory, what we see is criminal activity on a large scale and we’re actually inside the planning and execution of that. So rather than the aftermath being investigated by AC-12, we are actually with the criminals as they commit their offences. That means that there is high jeopardy and big action sequences, in fact probably more action sequences over the first few episodes of the series than were ever done before.