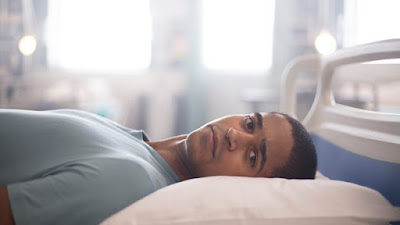 Set in a Glasgow hospital, Trust Me follows the story of Corporal Jamie McCain, who is recovering from a spinal injury which has left him paralysed.

But he faces a new enemy when patients on the ward start dying unexpectedly around him. Jamie believes the deaths are suspicious - but unable to move, his investigation is dangerous and difficult.

With everyone in the department hiding a secret, catching a culprit seems like an impossible task. But with Jamie’s behaviour becoming increasingly erratic, is the threat real or imagined?


Corporal Jamie McCain, played by Alfred Enoch
Corporal Jamie McCain is both tough and intelligent. His world is one of physical capability, getting on and doing, not talking about it. The kind of person you would describe as a man of action. As the story begins, the man of action finds himself unable to walk. Frozen both physically and emotionally, and suspected of suffering from PTSD, it looks like Jamie might never recover. But when patients on the unit die unexpectedly he becomes obsessed, determined to uncover the truth - and although he doesn’t know it, this is the first step in his rehabilitation. But are patients really being murdered? Or is that just the paranoid conclusion of a man with an unstable mind?

Dr. Archie Watson (clinical lead), payed by John Hannah
Dr Archie Watson is the unit’s clinical lead, whose bad jokes and awkward persona hide a seedier and much more sinister side. Archie is basically hiding in Neuro Rehab, devoting most of his time to minimizing his workload and avoiding trouble. Archie may appear indifferent, but he’s also manipulative and will stop at nothing to save his own skin. Despite his marriage, Archie often oversteps the mark with his female colleagues. His ‘technique’ works very well with a certain type of woman.

Debbie Dorrell (head physio), played by Ashley Jensen
Head physiotherapist Debbie can be sharp-tongued, and often gets on the wrong side of people without meaning to. Debbie is a fantastic physiotherapist, she’s a professional who’s fiercely committed to her patients. Sometimes she pushes a little too hard, but she always gets there in the end.

Dr. Zoe Wade, played by Katie Clarkson-Hill
Zoe has always been smart, but even qualifying as a doctor hasn’t quite pushed down her feelings of insecurity and imposter syndrome. Everyone around her seems so confident that she’s sure she’ll be found out any minute. Up until now, Zoe’s solution has been to try and embrace the conventional. Even in her relationships - she is currently engaged to Alex - she’s played it safe. And the safe option is working, sort of. So why isn’t she happy? Alex has been there for Zoe through dark times, but she’s much better now - or so she’d like him to think.

Dr. Alex Kiernan, played by Richard Rankin
A career neurologist, Alex is training to become a consultant. On the surface he is a fun, attractive and dedicated doctor. But all of this belies his steely ambition, and we sense an undercurrent of threat beneath his professional exterior. Alex’s desire to protect Zoe means that he doesn’t always recognise her boundaries, but if this is a problem for Zoe, then Alex is unaware.

Dr. Laila Karimi (clinical psychologist), played by Amiera Darwish
An exceptionally intelligent and intuitive woman, Laila loves being a psychologist. Sometimes she can come off a bit more like a scientist than a human being - which suggests she’s probably not as ‘stable’ as she’d like to think she is. Her friendship with Zoe is real - an opposites attract dynamic - but does Zoe know the real Laila, or is she hiding behind her clinical persona?

Parveen Shankar (pathologist), played by Manjinder Virk
Parveen is a studious and efficient pathologist and a stickler for the rules. But she is also strong and capable of standing up for herself when she’s faced with difficult situations. Others may assume that they can walk all over her - but it’s often the quiet ones you have to watch out for...

Danny Adams (patient), played by Elliot Cooper
Danny is a handful. His mind fizzes at a hundred miles a minute with technology stats, conspiracy theories and an obsessive love of Doctor Who. When Jamie arrives on the unit Danny self-appoints himself as his best mate, and soon takes Jamie into his confidence. Is Danny just a conspiracy nut, or could he actually be on to something?
Posted by JD at 14:29

Email ThisBlogThis!Share to TwitterShare to FacebookShare to Pinterest
Labels: Trust Me