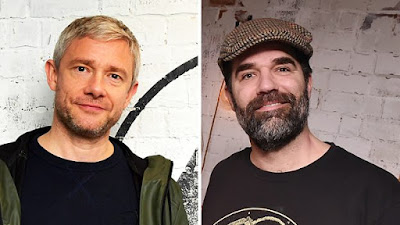 Rob Delaney and Martin Freeman will be joining BBC Radio 6 Music for a run of Sunday afternoon shows.

They will be hosting their own shows, covering Guy Garvey’s 2-4pm slot whilst he is on an extended break working on his next album. Cillian Murphy has been presenting the show since March, with his final programme on 2 June.

Rob Delaney says: “I’m thrilled to be presenting on BBC Radio 6 Music. Whether you listen to music while you make dinner, widgets or perhaps even love, I hope you’ll do so to my powerful rhythms.”

Cillian Murphy says: “Thanks so much to everyone at 6 Music, all the listeners, and especially Guy Garvey, for giving me the chance to play some music on the best radio station in the world. I had a splendid time. Looking forward to tuning in to the brilliant Rob Delaney.”

Paul Rodgers, Head of 6 Music, says: "Rob Delaney and Martin Freeman are both fantastic talents so I’m delighted they will be joining 6 Music, where they can bring their love of music to our Sunday afternoons. I’d like to thank Cillian Murphy, who has done a great job sitting in for Guy Garvey since since March - listeners have loved tuning in to him."

Rob Delaney will be on air from 9 June - 7 July, with Martin Freeman presenting from 14 July - 4 August. The shows will also be available on BBC Sounds.
Posted by JD at 09:42