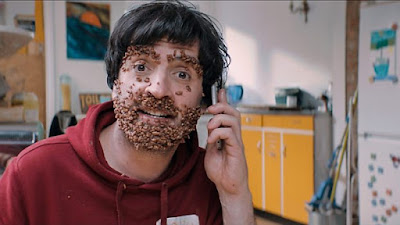 The commission of The Mind Of Herbert Clunkerdunk comes following the success of the Bafta-nominated short form pilot which aired on BBC Two last year as part of the critically-acclaimed Comedy Shorts.

The series (4x10’) which is being produced by Tiger Aspect (part of Endemol Shine UK), will see multi award-winning comedian Spencer Jones (Mister Winner, Upstart Crow) return to the screen as his alter ego, Herbert Clunkerdunk.

Joining Herbert are regulars Dom Coleman (Upstart Crow) as the irrepressible, unpredictable Jonny Wallop and Lucy Pearman (Mister Winner) as Bobby Kindle, Herbert's wife, who forever supports him as he tries to juggle real-world responsibilities: work, family, finances, and being a good dad. Expect to see a mix of impromptu music videos and talking household objects as Herbert navigates his way through everyday life only to be constantly interrupted by his quirky imagination.

On his new commission, Spencer Jones says: "To be given a full series for the BBC is one of my ultimate dreams come true. I was so chuffed to get it. However, that feeling has now slowly faded away and I’m absolutely bricking it. But I’m going to use the fear to push me to make this the best thing it can be. I’ve got a brilliant team of highly skilled people around me, so if Clunkerdunk ain't 'the nuts', then I can safely say it is completely my fault. How terrifying.”

David Simpson, Producer at Tiger Aspect, says: “I'm so thrilled that people are going to see more from the brilliant mind of Spencer Jones. He's a true original and this programme is Spencer at his very best. Wallop!"

Kate Daughton, Head of Comedy for the BBC, adds: “Spencer Jones has created a unique and gleefully daft world for his alter ego Herbert Clunkerdunk. We can’t wait to see what imaginative tomfoolery he has in store for us in this new series of comedy shorts for BBC Two.”

The Mind Of Herbert Clunkerdunk is a Tiger Aspect production written and created by Spencer Jones. The producer is David Simpson (Man Like Mobeen), the executive producers are Myfanwy Moore (Man Like Mobeen, Upstart Crow) and Spencer Jones and the series director is Martin Stirling (Spencer Jones' Christmas). The series was commissioned for BBC Two by Shane Allen, Controller of Comedy Commissioning. The Commissioning Editor for the BBC is Kate Daughton.

Filming of the full series will begin in early June this year. Transmission details will be announced in due course.

Email ThisBlogThis!Share to TwitterShare to FacebookShare to Pinterest
Labels: The Mind Of Herbert Clunkerdunk