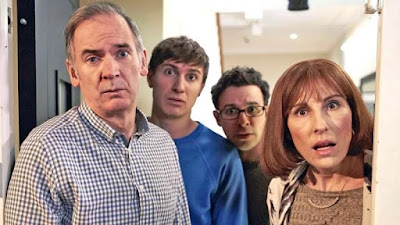 Friday Night Dinner is written and produced by Robert Popper, who co-created and starred in BBC Two’s Look Around You with Peter Serafinowicz, produced the Bafta-winning Peep Show, wrote on season 14 of South Park, and script-edited The Inbetweeners, The IT Crowd and Him & Her. Robert also wrote the bestselling The Timewaster Letters books under his pseudonym, Robin Cooper.  Recently, he co-wrote several episodes of Channel 4’s Stath Lets Flats, with Jamie Demetriou.

Kenton Allen, Big Talk CEO said: "Friday Night Dinner has grown into a monster hit for Channel 4 and it’s incredibly exciting to see the audience growing every season as new viewers fall in love with the antics of the Goodman household. It’s also incredible that Robert has singlehandedly written and produced all 31 episodes so far, which must make him one of the most prolific comedy writer/producers working today.  We’re incredibly grateful to Channel 4 for letting him have another go. Fingers crossed!"

Fiona McDermott, Head of Comedy at Channel 4, said: “We’re delighted that audiences love Friday Night Dinner as much as we do at Channel 4, and are thrilled that it will be returning. It’s always brilliant when audiences for a show grow over time and we’re thrilled that more and more people are falling in love with the Goodmans. We are so pleased to be making a new series with Robert and Big Talk.”

Friday Night Dinner is one of Channel 4’s longest running sitcoms. Series 5 is the second highest rating series for the show so far, beaten only by Series 1. It also attracted the biggest audience share across all series. The series averaged 1.9m / 11.4% per  episode – up +19% on slot average and up +27% for share - outperforming the series 4.

Launching in 2011 the series went on to win Best Situation Comedy at the 2012 Rose D’Or Festival and was nominated at Best Situation Comedy and Best Female Performance in a Comedy for Tamsin Greig at the 2012 BAFTA TV Awards. Other nominations include Best New Comedy Programme, Best Sitcom, Best Comedy Actress for Tamsin Greig and Best Comedy Breakthrough Artist for Tom Rosenthal at the British Comedy Awards 2011. Best Situation Comedy at the National Television Awards 2011, and gained a Best Comedy writer nod for Robert Popper at The Royal Television Society Award 2012. The recent series won the British Comedy Guide award for Best returning TV Sitcom.