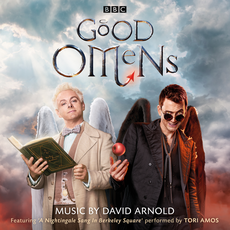 Following the odd couple, angel Aziraphale (Michael Sheen) and demon Crowley (David Tennant) in their quest to sabotage the end of the World, Amazon Prime's six episode mini-series delivers a tongue in cheek adaptation of this powerful and funny story.

From the Award-winning composer of Sherlock and Casino Royale comes a soundtrack that perfectly complements the Good Omens’ drama and visual sensibilities. At times nostalgic and eerie but always varied, beautiful and full of excitement, this robust, yet funny music entity has become another character in the story. Here, Arnold has created a contemporary soundworld for heaven and hell.

The closing song is Tori Amos’ version of A Nightingale Sang In Berkeley Square, a British wartime favourite referenced at the end of the book, conjuring feelings of separation and pining for untroubled times, and including the lines "There was magic abroad in the air. There were angels dining at the Ritz. And a nightingale sang in Berkeley square".

Terms and conditions
1. Closing date 13-06-19
2. No alternative prize is available
3. When the competition ends as indicated on this page, any and all entries received after this point will not count and emails blacklisted due to not checking this page first.
4. Winners will be chosen randomly and will be informed via email.