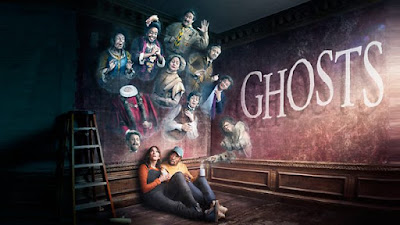 BBC One has ordered a second series of Ghosts, the top comedy series on UK television so far this year with a consolidated series average of 3.7m.

The hugely successful house-share sitcom is about a young couple who unexpectedly inherit a grand country estate, only to find it is both falling apart and teeming with the ghosts of former inhabitants.

The crumbling country pile of Button House is home to a troupe of restless spirits who have died there over the centuries, each ghost very much a product of their time, resigned to squabbling with each other for eternity over the most inane of daily gripes. Their lives - or, rather, afterlives - are thrown into turmoil when a young couple - Alison (Charlotte Ritchie) and Mike (Kiell Smith-Bynoe) - inherit the peaceful derelict house and make plans to turn it into a bustling family hotel.

The creators of the show say: “We are DEAD excited to be returning to BBC One for a second series of Ghosts. We could not have asked for a more enthusiastic response to the show, and can’t wait to get haunting Button House once again.

"We’d like to thank Charlotte, Kiell, Lolly, Katy and our fantastic crew for helping us realise such a hugely ambitious project. And thanks also to everyone at Monumental and the BBC for their tireless support of what is clearly a ridiculous idea. We are already hard at work on stories for series two, and can’t wait to share them with you."

Shane Allen, Controller of Comedy Commissioning, says: "Ghosts gave us all a very pleasant shock in landing so fully formed as an instant mainstream hit. This very special gang of writer-performers have created a rich character world shot through with their trademark wit, warmth and mischief."

Alison Carpenter, Head of Television, Monumental Television says: “We are immensely proud of Ghosts, and it's been wonderful to see the audience embrace the show. We can't wait to gather our hugely talented team back together and return to Button House."

The whole first series is available on iPlayer.
https://www.bbc.co.uk/iplayer/episodes/m00049t9/ghosts
Posted by JD at 13:52