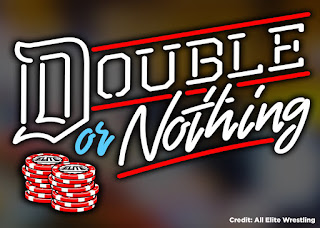 ITV, the largest commercial television network in the UK, announced a partnership today with All Elite Wrestling (AEW), the new wrestling promotion headlined by members of The Elite, to broadcast the highly anticipated DOUBLE OR NOTHING event on its ITV Box Office channel.

Fans across the UK can look forward to seeing all the drama, action and entertainment live from the MGM Grand Garden Arena in Las Vegas on the night of Saturday 25 May going into Sunday 26 May.  DOUBLE OR NOTHING, which sold out in under 30 minutes, features an electrifying card packed with stars including the headline clash between Kenny Omega and Chris Jericho.  The wrestling world will rock as Cody takes on his brother Dustin Rhodes, The Young Bucks battle the Lucha Bros for the AAA World Tag Team Championship, Hangman Adam Page clashes with PAC, and Britt Baker, Nyla Rose and Kylie Rae compete in a three-way match.


Additionally, before the live pay-per-view event begins at 1:00 a.m GMT, Sunday, May 26, the hourlong live pre-show special  BUY-IN will air for free on ITV4 at midnight.  BUY-IN includes the first ever "Casino (Battle) Royale," which will see 21 competitors including Jimmy Havoc, Billy Gunn, MJF, Michael Nakzawa, Jungle Boy, Glacier, Sonny Kiss, and Joey Janela entering the ring in waves of five wrestlers every three minutes followed by one final entrant, lucky number 21, all fighting it out in the ring until there is one winner, whose reward will be a future title shot against the first ever AEW World Champion.  BUY-IN will also feature a pair of high-flyers squaring off one-on-one as the UK's own Kip Sabian will face Sammy Guevara.

"We're delighted to announce this partnership with AEW, whose entry into professional wrestling is already making a massive impact on the industry and promises to deliver an electrifying event later this month, and a fantastic experience for our viewers and wrestling fans in the UK," said Niall Sloane, Director of Sport, ITV.  "Joining forces with AEW for this event is faithful to ITV's More Than TV strategy to develop direct relationships with viewers through big events available on its platforms."

"We've stated since our launch that we want to make this the greatest time ever to be a professional wrestling fan, and part of this plan is to make our product as accessible as possible to a global audience," said Tony Khan, President/CEO of AEW.  "Since our launch in January, we've signed the best talent, sold out our debut show in record time, and we've built relationships and formed bonds with the best media partners like ITV.  This collaboration with ITV is so important to AEW, ITV is the best in the UK, they were always my first choice to be our international PPV partner for DOUBLE OR NOTHING, and we're looking forward to a great show."