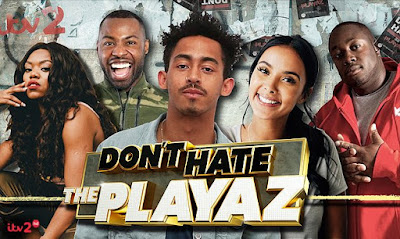 Don’t Hate The Playaz
The anarchic Hip Hop comedy show will return to ITV2 in Autumn 2019.

The first series proved hugely popular with ITV2 viewers and was nominated for a Royal Television Society Award this year in the Entertainment category.

Filmed in a gig-environment and hosted by Jordan Stephens, two teams made up of comedians, Hip Hop legends & celebrity Hip Hop lovers battle it out in front of a live audience for the ultimate prize: bragging rights!

Maya Jama and Lady Leshurr will once again lead the two teams alongside new guests each week.

The Stand Up Sketch Show
The comedy format that combines both stand up and sketch will return to ITV2 in early 2020.

From established stand up routines by some of the nation’s best loved comedians, to brand new material from Britain’s most exciting up and coming talent.  The Stand Up Sketch Show is doing what no comedy has ever done before.

Each sketch begins with a comedian telling their story on stage in front of a live audience, before shifting into a surreal reconstruction of the material.  Using some of the circuit’s funniest material, the reconstructions will feature visual jokes, supporting performances, ridiculous props and absolutely killer comedy.


ITV’s Head of Digital Channels, Paul Mortimer said “Don’t Hate The Playaz and The Stand Up Sketch Show were creative and original commissions for ITV2 and we’re delighted both shows resonated with our younger audience.”

Saskia Schuster, ITV’s Comedy Controller added “The Stand Up Sketch Show quickly established itself as a fast paced format that delivered the laughs from well known and up and coming comedy talent.  Don’t Hate The Playaz put its unique spin on panel shows and the producers have some great ideas lined up for the second series.”

Email ThisBlogThis!Share to TwitterShare to FacebookShare to Pinterest
Labels: Don’t Hate The Playaz, The Stand Up Sketch Show