The Ranganation - Q&A with Romesh Ranganathan 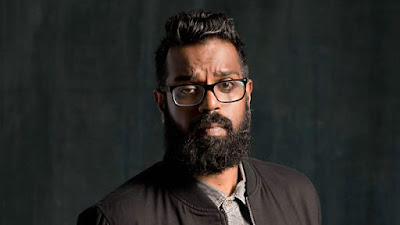 Romesh Ranganathan is the host of a brand new BBC Two topical comedy show which takes a humorous look at the week’s biggest talking points, from front page news to trending topics and the smaller stories you might have missed.

To help Romesh understand what the nation really think on a wide range of topics he will be consulting with his very own focus group, The Ranganation. This rambunctious group of 25 lovable, outspoken and passionate characters represent a real cross-section of modern Britain so expect to hear from people such as 'Cockney Geezer', 'Vicar’s Daughter', and ‘Romesh’s Mum' - who is a key member.

Each week he’ll also be joined by other comedians and expert guests to get their take on modern Britain and how stories in the news are affecting us all. Together, they workshop the lighter end of the news spectrum and discuss the stuff that we actually talk about, other than Brexit and Trump.


A Q&A with Romesh Ranganathan

Tell us about your new series, The Ranganation

I wanted to do a topical show not a political show. So how the show works is, I have a focus group of 25 people who come from different walks of life from across Britain, and they help me chew the fat over whatever has been going on that week.

So it could be political, but - for example - in the pilot we talk about people putting up England flags during the World Cup and how that makes people feel, because in the week we filmed it Royal Mail banned their staff from putting flags on their vans because of the connotations or whatever.

We discussed that and it’s interesting to see how different people, based on their background, reacted. For some people that flag was a symbol of patriotism and they thought it was amazing or disgusting that it was banned. And other people saw it as a sign of slightly distasteful nationalism. So it’s me discussing these issues with people from all different backgrounds, with a few other guests each week.

We have a team of people who cast all across the UK and we wanted people from all walks of life, ages and backgrounds. We held auditions, basically a very informal version of the show in an office so they could meet me and other Ranganation members and we could figure out who would be right.

It’s not just about them being good on TV necessarily, as people who are too TV savvy probably aren’t right. We are looking for regular people who are opinionated and passionate. Also there may be more than 25 members who might rotate.


Why did you want to make a topical show?

It’s because you sort of get pissed off with things, well maybe not pissed off, but there are certain things that dominate your conversations but they’re not always political. And I sort of thought there isn’t a show, a comedy-entsy [comedy-entertainment] sort of show - ‘comedy-entsy’ is one of the worst things I have ever said - that deals with topical stuff.

I don’t want to say we’re not going to talk about Brexit, or that it’s banned or anything, but, for example, me and my friends fiercely debated the recent spate of all-female reboots, and nerds getting upset about Captain Marvel. It’s those sort of things that people are talking about. It’s not necessarily political, it's watercooler chat for want of a more modern phrase, but it’s those things that aggravate people and I wanted to explore that. And I wanted to be the host of another show and so those two selfish motives married together to form The Ranganation.

It’s great! The honest truth is that it is great having my mum there. Does it grate slightly when people go on about how naturally funny she is? Yes it does. Is it annoying that she has more time in hair, makeup and wardrobe than I do? Yes it’s annoying. But she loves it, she loves getting recognised and I’m happy for her to be successful. Up to a point.


Is she ever going to take on projects without you?

I suspect so. She’ll deny it but I think that’s very much in her plans. We did an interview the other day and she was saying she doesn’t want to ever do anything without me but I believe that’s a lie. She would step over my dead body to get a cookery show, I can tell you that for nothing.

If you could invite anyone in the world to join The Ranganation who would it be and why?
Justin Trudeau, the Canadian Prime Minister. I like everything about him: he’s charming, I like what he’s about, he’s a good looking bloke, which normally puts me off people as I just think ‘you’ve had an easy life’, but I like him and think he’d be a good guy to have on. The only thing is he doesn’t qualify because he doesn’t know what it’s like to be British, it’s meant to be a cross-section of Britain. He would qualify if he decided to move to Britain, but we can’t just have him turning up, swanning in to do the show and effing off again back to Canada. That’s not what The Ranganation is about.


If you have to choose someone to be in The Ranganation that adheres to the rules of the show, who would it be?

Idris Elba. I think he’s got interesting things to say, he’s a good-looking guy and now he has got married it’s safe for me to be on a thing with him and not be annoyed that my wife is drooling over him. My mum fancies the pants off of him but is also very highly moral, so it would be quite nice watching her internal struggle with the fact she is absolutely obsessed with him but also respects the sanctity of marriage.


Do you have any pre-show rituals that you perform before the cameras start rolling?

I have an app on my phone that’s a brain training thing, and it does these little number and shape tests and I read somewhere ages ago that if you’re trying to get mentally sharp for something then it’s a good thing to do because it gets your brain revving. Whether or not it does something I don’t know, but I have got into this superstitious thing where I have to have a go on that.


What do you enjoy most about working with the public when you’re doing TV shows?

It's like pretending that I consider them equals but inside knowing I’m better than them; you look so humble because you’re in amongst them but actually you know you’re of a different quality. I’m joking, joking!

I like unfiltered people and people being honest, and members of the public often are, so that’s what is so great about the show. We’re not getting views from people who are worried about how they come across on screen, or worried about a career in television, they’re just saying what they think, and so that is quite refreshing and interesting as people are less guarded. It makes the show more exciting.


Which category, for want of a better word, would you represent if you were in The Ranganation?

We try and summarise people, so I guess mine would be overweight misanthrope. That would be the filter I’m approaching everything from I reckon. But the names are actually a lot catchier than that, so perhaps ‘fat sad’? ‘Sad fat man’? ‘Obese sad’?


Are your kids allowed to watch you on TV?

My eldest kid is nine and they’re allowed I guess. When I did The Misadventures Of Romesh Ranganathan for BBC Two they were interested in the places I had gone to and my wife thought actually this is one of the few things I have done that has any educational merit. So she watched it ahead and then would watch it with them with her finger on the fast-forward button because for a travel show I have a real inclination to drop the f-bomb, so she had to be mindful of that. They don’t go anywhere near my stand-up.


Are you already quite engaged with the news or are you going to have to ramp it up for the show?

No I won’t have to ramp it up, I’m pretty engaged already. I did Question Time a while ago, I’m not engaged enough to just wander in to that and freestyle it, but I knew enough to go on it. I am informed but I am not like Nish Kumar who is across everything and so politically minded, I’m not that way inclined. I do read the news, but not with any great purpose, rather I read it because it interests me, so I have a potted understanding of what’s going on. Combine that with my, I would say, sub-par intellect and you get quite an interesting take.


Where do you get most of your news from? Which sources do you use? Twitter?

I tend not to get it from Twitter. I do actually, and I’m not just saying this because we’re talking about a BBC programme, but I do tend to go to the BBC News website first thing and then I’ll go to the newspaper websites to see what their takes on stories are based on their leanings. And then I may go to Twitter to see what the worst-informed, most-reactionary group of people I follow have to say about everything.


Is that the kind of atmosphere you’re going to try and capture on the show?

I like the idea that the show will be a combination of people being informed, but also just shooting from the hip. We all go through life knowing what we should think about things, but sometimes that doesn’t coincide with what you actually feel about something, and I think it will be interesting to see that mixed in the show. We assume that people from certain backgrounds will think a certain way about issues, and in the pilot I was surprised by the way not everyone had a set-in-stone take on the things you'd expect them to because of where they’d come from.
Posted by JD at 11:15