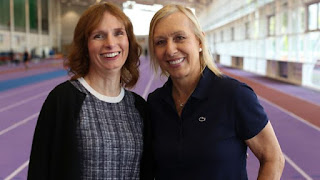 When Martina Navratilova called for an open debate about male to female transgender athletes competing in women’s sports earlier this year, a heated and passionate debate was sparked creating global news headlines.

In this one off special commissioned from Brook Lapping for BBC One, Martina sets out to open up the debate and find answers to some of her own questions by meeting a range of athletes, scientists and sporting officials to get to the heart of why the subject is so controversial.

Martina meets Dr Gemma Whitcomb and Dr Emma O’Donnell at Loughborough University who are leading the sports science research into transgender athletes and have a team dedicated to looking at the emerging issues around gender and fair participation in sport.

She discusses the complexities with Joanna Harper, a Medical Physicist who specialises in research into trans athletes and is a trans woman herself. Joanna knows first-hand the impact of gender transition on athletic performance - an elite runner all her life, Joanna explains how her run times dropped by 12% when she transitioned from male to female in 2004.

The film also includes contributions and opinions from elite female athletes like Sharron Davies, who has been very outspoken on the issue, as well as medical experts and sporting bodies.

Martina Navratilova says: “I hope that this documentary enables everybody to be more knowledgeable about the overall transgender and sport debate and hopefully brings us closer to a solution that makes as many people as possible happy.”
Posted by JD at 10:47