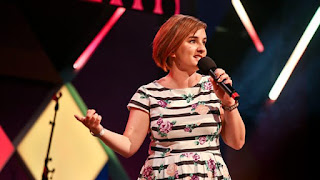 
The BBC is giving disabled people and people with mental health difficulties the opportunity to submit a true story about an unusual, complicated or funny encounter based on the theme Lost And Found. Successful applicants will get the chance to work with a top comedy script producer, and perform on the main stage in front of an audience at the Edinburgh Festival Fringe.


Laura Lexx, who has appeared on BBC One's Live At The Apollo and has previously won Best MC at the Comic's Comic Awards, will present BBC Ouch: Storytelling Live 2019 on 5 August at the BBC's Big Blue Tent.


Laura Lexx says: "I took part in the show last year to share my experience of dealing with anxiety and depression. I remember standing backstage worrying that I wasn't anxious enough to be a part of a show like this... oh the ridiculousness of worrying you're not worried enough to be officially worried.


"Being there on the night was skin-tinglingly exciting, watching people share stories that had never been public before, and the response afterwards to videos shared online was mind-blowing. Events like this really reach the audience they need and make a difference."


Philip Henry, one of last year's storytellers, says: "Being part of the BBC Ouch's event last year was an amazing experience for me, I'm so glad I took part. After the show aired on BBC Two I was contacted by people from all over the world and the feedback was 100 percent positive.


"From casual viewers who enjoyed the comedy of the story, to fellow sufferers who saw themselves in my situation and could empathise with my plight, I was overwhelmed with the messages of congratulations and support. Since then I've received funding to make a short film version of the story I told, so it's helped my career as a writer and film-maker too. I'm so glad BBC Ouch gave me the platform to raise awareness of Crohn's in such an entertaining way."


Damon Rose, Editor of BBC Ouch, says: "This show is the highlight of our year. Our aim is to find talented disabled people and people with mental health difficulties, and ask them to share their entertaining and often funny stories about their unique experiences. We want to share these stories far and wide - and where better to start than on the BBC stage at the Edinburgh Festival?"