First-look image and casting announced for C4's Aisling Bea comedy, This Way Up 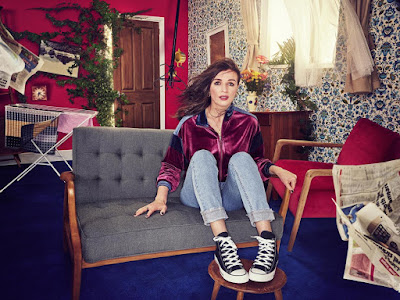 Channel 4 today announces cast, with a first-look image, for This Way Up (previously announced as Happy AF); A pin-sharp and poignant new six-part comedy in association with Hulu in the U.S., written by and starring, actor and comedian Aisling Bea (The Fall, The Comedy Lineup).

Bea plays Aine, a whip smart English-as-a-foreign language (TEFL) teacher trying to pull her life back together after a “teeny little nervous breakdown", as her sister Shona, played by Sharon Horgan (Catastrophe, Pulling), worries, not only about her younger sibling, but also about her own life choices. The TEFL school where Aine teaches brings together a room full of characters also trying to find their own hope, direction and happiness in this messy world.

Joining Bea and Horgan are Aasif Mandvi (The Daily Show, Halal in the Family) in the role of Shona’s boyfriend Vish, Tobias Menzies (The Crown, Outlander, Game Of Thrones) as Richard, father to one of Aine’s students and Indira Varma (Patrick Melrose, Luther, Game of Thrones) playing Shona’s colleague and confidante Charlotte.

Aisling Bea, writer and star, said: "After years of scripts and projects that never made it to air, this show is a bit of a dream come true, so I really bloody hope you like it. Sharon and I first played sisters in a TV show that got cancelled about eight years ago and we have gone on many drunken nights out across the world together since to stay in character for this project.

Email ThisBlogThis!Share to TwitterShare to FacebookShare to Pinterest
Labels: This Way Up