Stellar line-up announced for Children in Need: Got It Covered 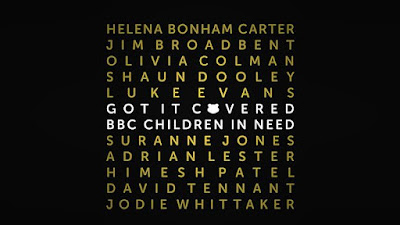 BBC One and BBC Children in Need announce the launch of Children in Need: Got It Covered, a brand new venture for 2019 which involves some of the UK’s biggest names from stage and screen as they band together to produce an entire album of cover songs, whilst helping to make a positive difference to the lives of disadvantaged children and young people throughout the UK.
A whole host of critically-acclaimed actors have volunteered their time to play a special part in this incredibly exciting project for BBC Children in Need this year. Among them are Helena Bonham Carter CBE (The King’s Speech, Sweeney Todd), Jim Broadbent (Iris, Harry Potter And The Half-Blood Prince), Olivia Colman CBE (The Favourite, Fleabag), Shaun Dooley (Gentleman Jack, Gunpowder), Luke Evans (Beauty And The Beast, Fast & Furious 7 & 8), Suranne Jones (Gentleman Jack, Doctor Foster), Adrian Lester OBE (Trauma, Hustle), Himesh Patel (Yesterday, EastEnders), David Tennant (Good Omens, Doctor Who) and Jodie Whittaker (Doctor Who, Trust Me).

A special 60-minute programme will follow the entire recording process and explore all the behind-the-scenes action, as the actors face the challenging task of laying down their bespoke tracks at the legendary recording studios Rak and Abbey Road Studios in London. Each of the actors will handpick a song that is most significant to them and receive expert guidance from Brit and Mercury award-winning record producers and songwriters Guy Chambers and Jonathan Quarmby.

Renowned vocal coach Mark De-Lisser will also be at hand to assist the actors with producing their tracks. The programme will also shine a light on the projects funded by BBC Children in Need, with a selection of the actors visiting projects to see first hand the difference their support will make to young lives.