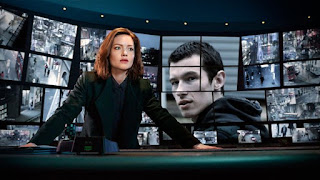 
When soldier Shaun Emery's (Turner) conviction for a murder in Afghanistan is overturned due to flawed video evidence, he returns to life as a free man with his young daughter. But when damning CCTV footage from a night out in London comes to light, Shaun's life takes a shocking turn and he must soon fight for his freedom once again. With DI Rachel Carey (Grainger) drafted in to investigate Shaun's case, she quickly learns that the truth can sometimes be a matter of perspective. Should she trust Shaun Emery?


The Capture is an acutely timed thriller that looks at a troubling world of fake news and the extraordinary capabilities of the intelligence services. In this 'post-truth era', can we really believe what we see?
Posted by JD at 20:15