8 Days: To The Moon And Back - Q&A - Anthony Philipson, Director 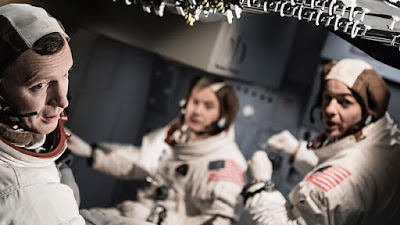 Eight days, three hours, 18 minutes, 35 seconds. That’s the total duration of the most important and celebrated space mission ever flown - Apollo 11 - when we first stepped foot on the moon.
8 Days: To The Moon And Back, a feature-length drama documentary marking the 50th anniversary of Apollo 11, will bring the untold story of the mission to life.

With access to hours of declassified cockpit audio recorded by the astronauts themselves, the film uses cutting-edge digital effects and dramatised performances to create a stunning 21st century visual journey, taking us inside the capsule and closer to the three astronauts than ever before.

8 Days: To The Moon And Back (1x90’) is made by The Science Unit, BBC Studios, co-produced with PBS and The Open University, in association with Canal +.

You weren’t born when the Apollo 11 landed on the moon. When did you first hear about it?
Growing up, space travel was very much something that captured our imagination. A magical, almost superhuman endeavour encapsulated by the birth of the Space Shuttle programme.

Launches were broadcast live and our school would gather to watch these incredible machines blast off into space. As children this fired our imagination and peaked our interest in the origins of space exploration, from the original Sputnik programme right through to majestic Apollo programme. Although I was only born in 1971 the original moon walk was still very much alive, most notably in the Saturn V rockets I coveted in toy shop windows!

What attracted you to this project?
Quite simply the opportunity to tell the story of one of the most famous moments in human history, from a completely new perspective.

What did you set up to achieve?
I wanted to bring the audience inside the Saturn rocket to experience the entire mission as if they were the fourth crew member.

To understand how it felt on a personal level for all three astronauts to undertake such a momentous mission, to see what they saw and to feel what they felt. Using the flight logs and data we wanted to ensure every moment depicted was true to the real mission. Ultimately I wanted to make sure nothing was heightened or overly dramatised. It’s all as it happened, as never seen before.

What challenges did you encounter?
The challenges were two-fold. Firstly getting our cast to manage the huge demand of lip-synching the original recordings, and the second was pulling off our ‘Hollywood’ ambitions on a fraction of their budget.

My incredible cast managed to pull off the first challenge beyond even my ambition. They were simply incredible at bringing the three iconic astronauts to life. The second was achieved through a combination of the incredible talents of the Matthew Button’s designer team, the Director of Photography Tim Cragg, and the VFX team at BDH. Without them we would never have been able to create the environment both inside and outside the rocket to simulate space flight.

How did you bring your vision to life?
A combination of incredible actors pulling off the lip-synching and the hugely talented and dedicated graphics team at BDH. With painstaking attention to detail they mapped out the exact flight plan to make sure the visual elements of the mission were accurate at every point of the journey. The distance to the moon, the trajectory of approach, and the landing were all analysed to ensure what the audience sees is as it was for Aldrin, Collins and Armstrong. These graphics elements, combined with the immersive performances from my actors within the lifelike sets, made for the perfect combination.

What made you decide to use the actual cockpit audio recorded by the astronauts themselves?
It was never in doubt to use the actual recordings. It would have been far more straightforward transcribing the recordings and have our cast perform the words as recorded, but nothing can compare to hearing the real voices themselves. That’s what unique about the film. Hearing Aldrin, Collins and Armstrong in their own voices makes the viewing experience undeniably more engaging and provides a perspective on the story that hasn’t been seen before.

Why should people watch 8 Days: To The Moon And Back?
That’s why I hope people watch 8 Days: To The Moon And Back. It’s a familiar story told in an entirely unfamiliar and unique way. We all know the iconic moments of the mission, the famous quotes that will live forever in human history, but what most people haven’t heard is what was said in the lead up to and after these moments. It’s three men hurtling towards the moon in a tin can whilst the whole world watches on in awe. Hopefully this film re-engages our wonder at this amazing human achievement and the prospect of further space exploration.
Posted by JD at 10:39