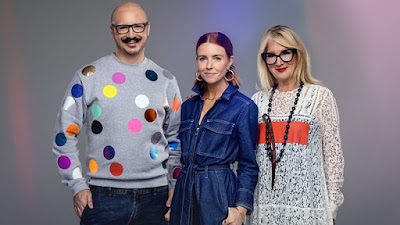 Following the success of series one earlier this year, BBC Three has announced a second series of Glow Up: Britain’s Next Make-Up Star - with Stacey Dooley returning to host the competition alongside industry icons and series judges Val Garland and Dominic Skinner.

Casting now, the second series will give aspiring make-up artists the chance to brush up on their skills and impress some of the biggest names in the business through a range of real-world professional assignments and themed creative tasks, which last year included working on looks for the cast of Kinky Boots and supermodel Leomie Anderson. Contestants were taken into the worlds of film special effects, fashion magazines, the catwalk, drag and social media, among others, where they had the chance to showcase their talents to Val, Dominic and guest judges such as online make-up sensation NikkieTutorials, drag queen Kim Chi and world-renowned photographer Rankin.

The first series, in which Ellis Hill was crowned the winner, was incredibly popular and saw fans take to social media to recreate their favourite looks each week. Since winning Ellis has gained experience with some of the world’s top make-up artists, including joining Val Garland’s team at Cannes Film Festival to assist with the red carpet looks for a-list celebs.

Stacey Dooley says: “We had so much fun filming the last series of Glow Up, so to be back for another with the legends Val and Dominic is a dream come true. I was blown away by the talent and creativity last time and it was a pleasure to be part of the journey. I can’t wait to get to know the new MUAs!”

Val Garland says: “I’m absolutely thrilled to be back for the second series. I’m looking forward to all the creativity and drama, and of course I can’t wait to work with Stacey and Dom again! I’ll be looking for skills, imagination and professionalism in the MUAs, as well as how they work in a team and how they react and resolve when things go wrong. Glow Up is a life changing experience and I wish each and every one of the hopefuls the very best of luck.”

Dominic Skinner says: “I’m so excited to get back into the Glow Up HQ with Val and Stacey and to see what incredible looks will be created. The new artists coming through those doors will really have to bring it, as last year’s MUAs blew me away with their talent and set the bar so high.”

Fiona Campbell, Controller of BBC Three, says: “The first series of Glow Up was a real hit with our audience and brought something fresh and new to BBC Three. It was filled with creativity and had a spirit of fun and self expression. Developing formats that can return is part of our DNA and it was a no brainer to bring this back for more.”

If you have what it takes to be Britain's Next Make-Up Star, you can apply now.
Posted by JD at 10:31