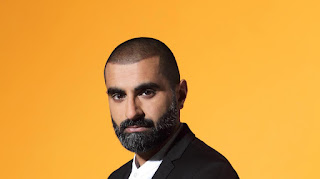 One of the most exciting break out stars in British comedy, Tez Ilyas, joins Channel 4 this summer with The Tez O'Clock Show, a late-night satirical comedy show.

Comedian Tez Ilyas presents a fast-paced mix of stand-up, sketches and studio antics. Filmed in Manchester with a combination of comedians and celebrity guests, this hilarious and subversive show will blow the cobwebs off TV satire and prove once and for all that it's possible to joke about anyone and anything without getting cancelled.

The show is a topical mix of sketches and studio antics, including provocative monologues and celebrity interviews.

Crashing into the studio show will be parodies, sketches and news bulletins from the Pakistani Broadcasting Corporation (PBC), starring Man Like Mobeen's Guz Khan and comedian Sindhu Vee, which will provide a satirical take on the news and show Britain (and the West) in a very different light.

The studio show sees Tez take part in a briefing room – just like the ones that happened when he worked at the Home Office - on the hot topics of the day. Here he'll be briefed by his fellow fast rising comics and Uncivil Servants, Sophie Willan and Adam Rowe, who will each try and sway him to their way of thinking.

He'll then be joined by his co-anchor Sindhu Vee, in the on set shisha café, where they'll be joined by funny, opinionated, big name guests.

The fast paced 3 x 60' show, airing at 11pm each Thursday from 25th July is made exclusively for Channel 4 by Expectation and Ilyas' own company Pious Productions. It will be filmed each week at Manchester's MediaCityUK in front of a live studio audience.
Posted by JD at 20:14