A Bank Holiday double bill for Poldark finale on BBC One 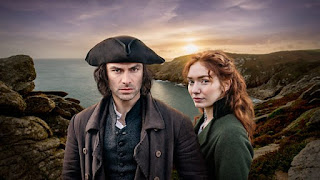 The fifth and final series of Poldark will conclude in an exciting action-packed double bill over the late August Bank Holiday weekend on BBC One. The penultimate episode of the series will air on Sunday 25th August at 8pm followed by the finale on Monday 26th August at 8:30pm.

Charlotte Moore, Director of BBC Content says: "Over the last four years Poldark has been a runaway success for BBC One and has become a firm favourite with audiences of all ages. It's been wonderful to follow Ross and Demezela's adventures and the changing fortunes of the Poldark and Warleggan dynasties.

"From the beginning everyone involved in the production has been committed to being faithful to Winston Graham's brilliant novels, and so this is sadly the last episode of the last series. Everyone at the BBC would like to thank fans in Cornwall and around the world who have been so supportive of the show, the incredible cast, the crew, Debbie Horsfield, and the team at Mammoth for bringing us such a special series."

Writer Debbie Horsfield has delved into history and taken inspiration from Winston Graham's novels to adapt an incredible five series of Poldark for BBC One. The finale concludes with Ross Poldark seeking to foil a French invasion and implicate his enemies. However when his secretive plans go awry, he receives helps from unexpected quarters.