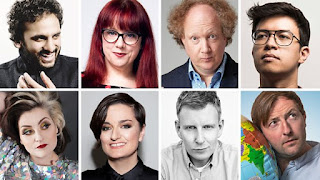 The new series will begin on 30 August on BBC Radio 4 and BBC Sounds.

Kicking off the first episode will be award-winning comedian Zoe Lyons. Zoe has been a regular panellist of The News Quiz, first appearing in 2016. She frequently appears across the BBC and had a Radio 4 series, Zoe Lyons: Passport Paddy in 2018.
Posted by JD at 21:40