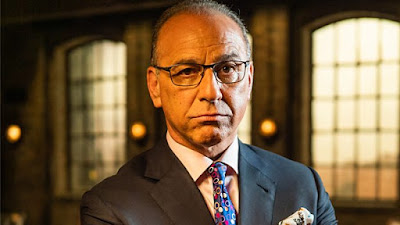 Theo Paphitis returns to BBC Two’s Dragons’ Den as a guest Dragon in the new series, which starts this Sunday 11 August, Theo will appear later in the run.

He stands in for Touker Suleyman, who was unable to film for part of the series, and will appear in a number of episodes alongside the current line-up of Dragons; Deborah Meaden, Peter Jones and Tej Lalvani, as well as the newest and youngest ever Dragon in the Den, Sara Davies.

Theo is one of the favourite and most formidable Dragons to have appeared in the Den. He originally joined in 2005 as part of the line up in the second series but stood down after nine series in 2013 to focus on his retail businesses.

On returning to the Den Theo Paphitis says: “It was my Godfather moment… just as I thought I was out, they pull me back in, and it was a pleasure to breathe some Dragon fire into the Den again. When I received the call asking me to stand in for part of this upcoming season it didn’t take long to say yes but it did feel like my Bobby Ewing moment, stepping out of the shower. The moment I sat in the chair like I had never been away. I did try to reclaim my middle chair from Deborah but she wasn’t having any of it.

“Being the first and only emeritus Dragon in the Den is an honour. I enjoyed relieving the current Dragons of some great investments along the way, and rekindling some old rivalry.”

Touker Suleyman says: “I’m grateful that my good friend Theo was able to step in to the Den to keep my seat warm while I had some time off. I can’t wait to see him back in action and keeping the other Dragons on their toes, but don’t worry, I wasn’t gone for long!”