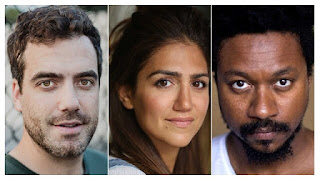 Co-creators Lucy Prebble and Billie Piper said: "A strong, dark, fun tale like I Hate Suzie needs actors with nerve as well as talent. We're thrilled to be working with such a brilliant ensemble. We hope you enjoy!"

Directed by Georgi Banks-Davies and produced by Andrea Dewsbery for Bad Wolf, the series will air on Sky Atlantic and NOW TV in 2020.

I Hate Suzie is a bold, bracing, drama about the moment in life when the mask slips, asking if any of us can survive being well and truly 'known'. Suzie Pickles (Piper), a star on the wane, has her whole life upended when she is hacked and a photo of her emerges in an extremely compromising position.

This excruciatingly honest eight-part series reveals Suzie's unmasking and its trauma episode by episode, through the stages of Shock, Denial, Fear, Shame, Bargaining, Guilt, Anger and Acceptance as Suzie and her best friend and manager Naomi (Farzad) try to hold her life, career and marriage to Cob (Ings) together.

Produced by Bad Wolf Limited, I Hate Suzie was commissioned by Zai Bennett, Managing Director of Content at Sky and Cameron Roach, Director of Drama, Sky Studios. Liz Lewin is the Commissioning Editor for Sky and the series is co-created and executive produced by Lucy Prebble and Billie Piper. Julie Gardner and Jane Tranter are executive producers.
Posted by JD at 15:48

Email ThisBlogThis!Share to TwitterShare to FacebookShare to Pinterest
Labels: I Hate Suzie