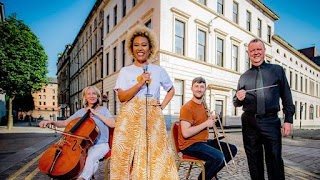 Bringing several musical worlds together in harmony, she then gives her selected soloists, duos and groups the opportunity to join her for a uniquely uplifting concert with the BBC Scottish Symphony Orchestra, under the guidance of world-class orchestral conductor John Logan, at the illustrious City Halls in Glasgow.

The result is a truly magical musical journey, where songs and stories merge to celebrate the connection between people from different walks of life and their shared passion for music.

The series starts a four-week run on the BBC Scotland Channel at 10pm on Thursday 19 September, just after the 13 September release of the singer's third studio album, Real Life.

Executive Producer David Staite says: "Street Symphony explores the stories behind the musicians we see on our streets every day and looks at how their raw, pared-back performances can be escalated to something spine-tingling.

"Emeli was the perfect fit for the programme because she is genuinely appreciative of the talent that's out there on our streets and she's passionate about giving our buskers the recognition they deserve.

"Over the course of the programmes, we also invite Emeli to recall her own musical story, to look back over her early years growing up in Alford, Aberdeenshire, and at her time as a student at Glasgow University. She explains how people and places shaped her during that time and influenced the performer and writer that she is today."
Posted by JD at 20:34