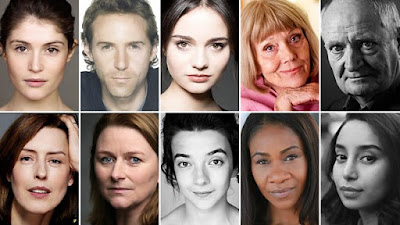 An adaptation from Bafta award-winning writer Amanda Coe of Rumer Godden’s iconic tale of sexual repression and forbidden love for BBC One and FX Productions.

Charlotte Bruus Christensen makes her directorial debut having previously been Director of Photography on hit films such as Girl On A Train, A Quiet Place, Fences as well as DNA and BBC Films’ Far From The Madding Crowd.

Returning this haunting love story to its original setting in the 1930s, Black Narcissus follows Sister Clodagh (Arterton) and the nuns of St Faiths, who travel to Nepal to set up a branch of their order in the remote palace of Mopu.

In the unfettered sensuality of the so-called House of Women, Sister Clodagh finds herself increasingly attracted to the handsome and damaged land agent, Mr Dean (Nivola). But as the repressed memories of Clodagh’s past become entangled with the tragic history of Princess Srimati, history seems doomed to repeat itself.

Are there really ghosts here in the Himalayas, or are the nuns just succumbing to long-repressed primal desires? And which of them is prepared to die - or kill - for love?

Announcing the project, writer Amanda Coe says: “I’m thrilled to be adapting Black Narcissus for BBC One. It’s a truly extraordinary love story, as well as a brilliantly unsettling piece of 20th century gothic about the power of a place to get under your skin and the dangers of refusing to learn from history.”

Black Narcissus was previously adapted for screen in 1947 by Powell and Pressburger and subsequently won two Oscars for Cinematography (Jack Cardiff) and Art Direction (Alfred Junge).
Posted by JD at 16:46