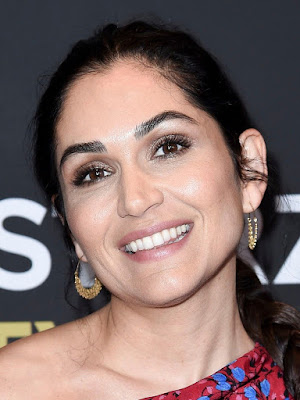 Loren’s character, Danica Harlan, is the charming and ambitious governor of planet Harlan's World. She has the support of the people, but keeps an uneasy grip on the political players who surround her.
Additional Cast: Anthony Mackie as Takeshi Kovacs; Renée Elise Goldsberry as Quellcrist Falconer (returns); Chris Conner as Poe (returns); Dina Shihabi as Dig 301; Simone Missick as Trepp; Torben Liebrecht as Colonel Carrera; James Saito as Tanaseda Hideki.

About Altered Carbon:
Altered Carbon is based on the groundbreaking cyberpunk novel by Richard K. Morgan. The world of Altered Carbon takes place over 300 years in the future. Society has been transformed by new technology: consciousness can be digitized; human bodies are interchangeable; death is no longer permanent.

About Loren:
Lela Loren is one of Hollywood’s rising stars. She has impressed audiences through her work in film, television, theatre and even the digital space and continues to show her outstanding range and grace in a variety of projects. Loren was most recently seen in the Starz series “Power,” where her character’s fate was revealed on Sunday, August 25th. In the summer of 2014, Loren was on Fox’s action drama series “Gang Related,” alongside Terry O’Quinn, Jay Hernandez and Ramon Rodriguez where she played Silvia, caught in a love triangle with the two leads. Loren also gave a standout performance in the thrilling Summit Entertainment film Snitch where she co-starred alongside Jon Bernthal and Dwayne Johnson.

She appeared in a lead role in the Lifetime television movie Stalkers opposite Drea De Matteo and Mena Suvari. The film is based on the true story of the prosecutor who authored the stalking law in California. She has ventured into comedy as well, appearing in Warner Bros’ The Hangover III, and Sony Pictures’ Reign Over Me opposite Adam Sandler and Don Cheadle.

She has also starred in the Bryan Singer-produced web series "H+", a joint venture with Warner Bros Digital Distribution and YouTube. Last year, Loren starred in an episode of the CBS drama series “Bull.” She has guest starred on a number of other popular television series including: “The Closer,” “Covert Affairs,” “Lost,” “The Mentalist,” “Chuck,” “NCIS,” “The Unit,” “The Shield,” “CSI: NY,” “CSI: Miami,” “Cold Case” and many more. In 2009, she gave a raved-about, leading performance on stage in “Boleros for the Disenchanted” written by José Rivera (acclaimed screenwriter of The Motorcycle Diaries). She was hailed as “first among equals” and “a rare find” for her portrayal as Flora. Loren was born and raised in California. She is multilingual: fluent in English, Spanish, and Italian.