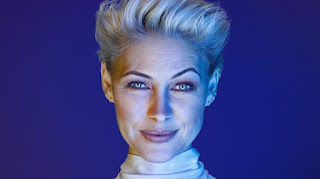 The stand out TV show of last year, The Circle, is back for a second series. New host Emma Willis takes the reins of this innovative game, where up to £100k is on offer for the winner, so the stakes are high. In the game where anyone can be anyone, who will win The Circle?

In this interview Emma Willis explains what to expect from the new series and tells all about the highs and lows of social media.

Welcome to The Circle. What did you think of the show when you heard about it?

Well, I totally missed it because I was doing Big Brother and it was our competition! Then lots of my friends that used to work on Big Brother but had left to work on other things said they were watching it. I said, "What do you mean you're watching that? What about Big Brother?", and they went, "Oh no, we're watching that too, but it's really good and you'd love it." I didn't think I would and then I watched it after Big Brother finished and I couldn't stop watching it!

How did you feel when they asked you to host the show?

It just felt like a natural thing to do, to be honest. I know there's this kind suggestion it is just a replacement for Big Brother for me but I view it quite differently. The thing with Big Brother is that for me, I always viewed it with the purist mentality, it was a social experiment. That is always how I watched Big Brother. But this, I very much watch it as a game. I hated Big Brother being compared to a game but this is clearly a game with the interaction of people, how they'll react in certain scenarios and then seeing who is going to be themselves and who is going to play it to try and be the most popular and win that money.

For people who missed the show last time around, how would you describe the format?

It's a game show where someone can win a hundred thousand pounds. The way they will win that is either by being themselves or by pretending to be someone else who they think would be the most popular person in the Circle. The Circle is not a circle. It's a block of flats, and they all live on their own and they never meet until the end of the game. But one of my favourite parts of the show is when a player has been blocked, meaning they're not very popular. They can get to go knock on the door of one other person that's in the circle to find out if it's really them or not. It's the most exciting part of it for me because they're talking to somebody that they think is one person, for example, last series Dan was talking to this hot chick that he fancied, and she's been really forward with him and kind of putting it out there and saying what she wanted and stuff. Anyway, she was actually a woman in her 50s who was pretending to be younger. He was like, "Wow, she is full on. She's proper putting it out there and telling me what she wants." So, she got blocked and she knocked on his door, walked in and he was like, "Holy shit!" Those moments are crazy but it's also so lovely to see when they come face to face with who they think they've been talking to and it is genuinely them, they're so happy that they haven't been lied to and they have had a real connection. Those moments are really, really good.

What do you make of the format of the show?

Before I'd watched it, I was like, "This is glorifying what is wrong with social media, where anyone can be anyone. You don't know who you're talking to". But I hadn't watched it and that was just my opinion. Then I watched it and I thought "This is a glowing beacon to teach people, do not trust who you're talking to online. Because you just don't know!" So I think it's a brilliant vehicle for education in the way that a game is showing you that you should be so wary of anything that you're doing online, who you're talking to. It's fascinating to see what people are going to do. How are they going to play it, who will be themselves? What I also loved about the first series was there was the game play element, there was the social interaction element, but then there were also the human stories. Like Genelle, she wanted to know what it was like to not just be seen as a mum. You know? Yes, she's a mum. That is a massive part of her life, but she's also herself. And Freddie wanted to know what it was like to be seen as a man rather than a gay man and have those tags assigned to you. I really loved that part of it last year as well. So I'm hoping there's more elements of that this year and people playing it for that reason.

In a way do you think it's a social experiment for modern society, like Big Brother was when it first started?

It is, it's based on the world that we live in now. Most of the time you're keeping up with your mates by what they've just posted, you know? Or picking up the phone and texting them. You're like, "Oh, she's on holiday…have you had a nice time?" That's it. So I think it's going to be interesting and fun to watch.

What do you think of social media?

I think I have quite a healthy relationship with social media. I can see how it can be addictive but I also like to keep it at an arm's length. I like to use it for work and I like to use it for personal use as well. I'm always conscious of being realistic on it and painting a true picture of my life, rather than a version of you. I think that's the responsibility we should all be taking. Even if you have that strength I think we can all still get sucked into it.

Do you ever find yourself looking at your likes and wondering why you didn't get as many as you'd thought you might?

I try not to bother with it. I think I'm a bit old, I mean, I'm not because obviously social media I'm a part of, but I didn't grow up with it, if that makes sense. So it's not all consuming for me, which is why I think I probably have quite a healthy attitude towards it. I think I enjoy it, but I'm not stuck to my phone constantly. I don't go, "Oh, why hasn't that one got that many...?" What I find interesting is what gets a lot of likes. I'm not like, "I want that one to get more than that one", I just question what is it about that particular post that is liked more than the other. If I do look at my likes, I wonder, "What is it? Is it because Matt's in that picture that it's got more likes rather than the picture of my scones with cream and jam?" What makes a picture popular? I haven't got a bloody clue!

It can get addictive…

It totally does. It should be enjoyable and it should be either a tool for your trade or some way where you can express the things that you enjoy or that you're into or feel good about or to connect with somebody that's similar to you or to stay in touch with friends. I think if it could all be a positive platform, it would be wonderful.

Have you got a favourite social media platform?

Instagram's my favourite. I was against it for such a long time. I actually find Instagram a much more positive place than Twitter. I think because it's all based on a picture, that's much easier and people want to see nice pictures, not nasty ones.

What types of characters are you hoping to see on the show this year?

I'd like diversity. I'd like differences, you know? Older, younger, different backgrounds, different sexualities. Variety, I think, is always good in things like this otherwise it's just a whole group of people who are exactly the same. You need difference. You need variety. You want people being themselves. You want to see how people will play the game by taking on a different personality.

Do you think because the contestants aren't living together that this series is perhaps not as naughty as other shows?

Yeah, it is PG. But there are certain conversations that might happen that I wouldn't want my 10 year old to be watching! She probably needs to be a little bit older for this. What's brilliant to watch is seeing if people go in with one objective and that is to win the money and then does their conscience kick in? Are they're like, "I literally can't do this, I'm lying to them and I can't do this anymore". Then they might switch again and remember it's for a hundred grand. It's for the money that, to an extent, drives that decision. It's like Big Brother in the sense you can go in thinking, "I can do this, I can win this money". And then you get into that situation and soon realise you don't actually want to win anymore and get out. Or, start by thinking I'm going to lie my whole way along and then, do you know what? I can't lie anymore. This is a massive game at the end of the day so you need your tactics but you also need to adapt.

The contestants live alone, could you cope well in that environment?

Social media is constantly evolving, do you think that this series can evolve as social media does and could run for years?

To try and second guess what is going to happen in the world of social media, I can't even go there. Somebody was talking about the TV show Years and Years earlier, which I haven't watched yet, I'm scared to watch it because of what people told me about it. I don't want to possibly see the insight into where things can go. I just want things to be happy and level out. I hope the show lasts and it has legs and I hope it is a game show that has a positive spin on social media and a positive viewpoint on social media but makes it educational as well.

Do you worry about your career and what you'll do next?

No, because I never thought I was going to have it, so I should just enjoy it. One day it will end and I'll have had a bloody good time doing it!