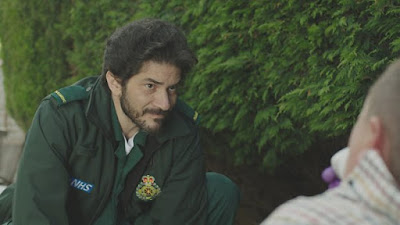 Uriel Emil joins the long-running BBC One medical drama this Autumn as new paramedic Lev.
Steely and tough but gentle at heart, Lev certainly makes an entrance on his first day on the job when Jan and Ruby catch him in a scrap with someone outside the ambulance station. A devoted family man, Lev will have his world rocked on all fronts in the coming year.

Uriel Emil says: “I feel privileged and honoured to be part of the Casualty clan and I hope the viewers will enjoy the fresh angle explored through my storyline”.

Simon Harper, Executive Producer of Casualty and Holby City says: “Uriel brings a fantastic, exciting energy to the table in his portrayal of the troubled Lev. As a Russian paramedic with a stormy past he’s a really fresh and unique character in the Casualty mix, and I’m so looking forward to the audience getting to know him in what’s going to be an explosive series.”

Casualty viewers will see Uriel on screen as Lev in September on BBC One.
Posted by JD at 09:48