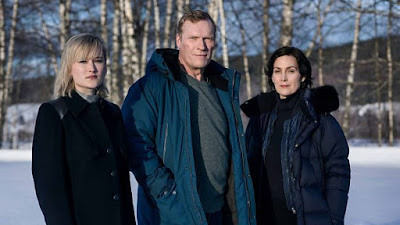 BBC Four has acquired ten-part Norwegian crime drama Wisting from Banijay Rights.
The drama, which stars Sven Nordin and Carrie-Anne Moss, is based on the best-selling books The Caveman and The Hunting Dogs by writer Jørn Lier Horst. Set in the unique and stunning landscape of Norway, this series follows homicide detective William Wisting as he wrestles with the most challenging and shocking case of his career: a wanted American serial killer preying amongst them.

Meanwhile, Line - Wisting’s intrepid journalist daughter - is chasing headlines, leading her straight into the path of the serial killer.

Suddenly, an old case comes back to haunt Wisting, and a dreadful accusation is hurled at him. How will Wisting save other lives when he finds himself suspended and fighting for his own reputation, career and life?

Sue Deeks, Head of BBC Programme Acquisition, says:
"Wisting has already been a tremendous success in Norway, and we have no doubt that BBC viewers will be equally engaged by such a likeable, emotionally complex lead character, and a compelling plot full of twists and turns."

Chris Stewart, Commercial Director, Scripted, comments,
“Wisting is a multi-layered drama, that is sure to keep BBC audiences in suspense throughout. It’s a classic cat-and-mouse thriller interwoven with some scintillating character performances from a stellar cast. I’m sure the UK audience will embrace this fantastic screen adaptation with equal enthusiasm."
Posted by JD at 09:07

Email ThisBlogThis!Share to TwitterShare to FacebookShare to Pinterest
Labels: Wisting