David Walliams will host the 2020 National Television Awards in January, live on ITV 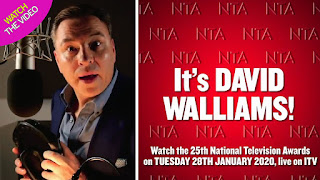 A multiple NTA winner himself, David will take centre-stage as host of the UK’s leading awards show.

“I am thrilled to be the new host of the NTAs, and will ensure I will also win them all”.

“The National Television Awards are coming soon and we have two more exciting reasons to celebrate in January 2020 – it will be the NTA’s 25th anniversary AND our host is the brilliant David Walliams.

David is a man of so many talents - a comedian, actor, best-selling author, TV Judge and charity fundraising hero… and we look forward to him now being the NTA’s Celebrator-in-Chief in this very special year.”